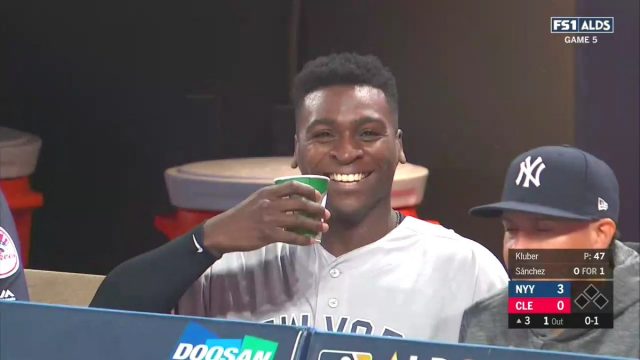 Hello, the New York Yankees have gotten another wonderful contribution from their clutch shortstop Didi Gregorius.

We thought one home run was great. Well, how about another one! Gregorius took another Kluber pitch to the right field seats, giving the New York Yankees a 3-0 lead.

Didi Gregorius came to play.
He just hit his second home run of the night off of Corey Kluber. ?
?: @FS1 https://t.co/FyGjha6sYk

Remember when Brian Cashman snuck this trade through and snagged Didi Gregorius from the clutches of two other oblivious teams? Well here he is, single-handedly keeping the Yankees’ playoff hopes alive.

I mentioned earlier that Gregorius entered tonight batting only .154 against the ace. Well, he’s 2-for-2 tonight with three RBIs.

A clutch shortstop in the playoffs. That sounds familiar now, doesn’t it?

Plus, Gregorius added a little, subtle bat flip to his swing this time and it seemed like the bench wasn’t even surprised. They have all the faith in the world in this young shortstop.

With CC Sabathia, the Yankees are rolling right now. But the game isn’t even close to over yet. Keep on chugging along, Yankees.

NEXT: Prolonged Matt Holliday Absences Is Unfair To Yankees Veteran