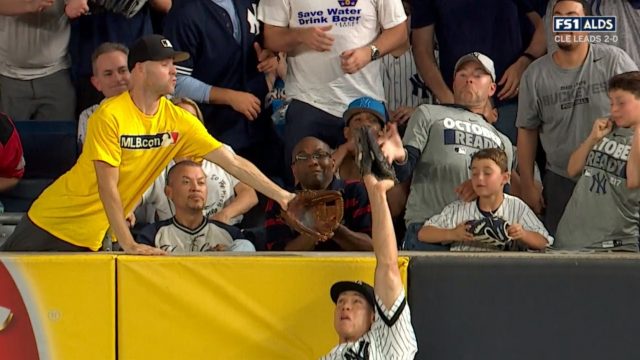 Those New York Yankees are hanging in there with the Cleveland Indians in Game 3 with a little help from their big guy, Aaron Judge.

Walls cannot contain him! Neither can Zack Hample. Aaron Judge may not be hitting home runs right now for the New York Yankees but he’s still helping them stay in the game.

Francisco Lindor was threatening to hit another home run to sink the Yankees in this series but not on Judge’s watch.

Judge barely even had to leave the ground to get this, that’s how monstrous he is. Plus, he casually pulls it in, throws it to the infield and laughs. Likely about how freaking tall he is or something ridiculous.

You get the picture. He literally reached up, snagged the ball and acted like it was nothing. In an elimination game.

Wow, the Judge just continues to make things look easy, whether at the plate (not recently) or in the field. And I think we’re glad that he got the start coming out of spring training.

Perhaps the greatest thing about this moment? Judge literally snagged the ball out of the hands of famed ball hog Zack Hample.

Judge did not just save the Yankees from going behind in an elimination game. He saved the internet from having to listen to Hample brag about his most recent catch.

Thank you, Aaron Judge, in more ways than one.