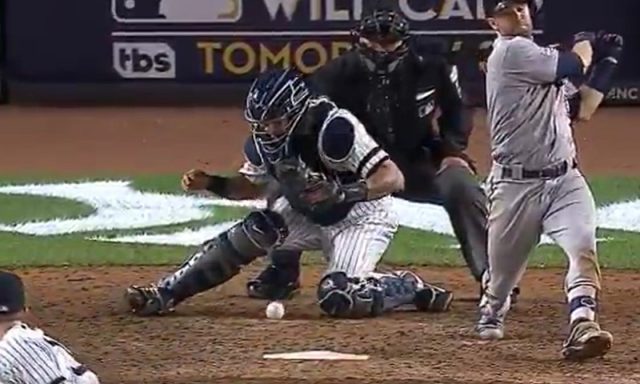 Oh, Gary. Gary Sanchez gives up a lot for his New York Yankees teammates, including his ability to have children.

And for good reason. As David Robertson fired in what he hoped was a strikeout pitch, Sanchez ended up getting nailed in the groin by the foul tip.

And not just a near miss. He got hit head-on by on of DRob’s finest pitches.

Oh, the agony. The entirety of Yankees nation were holding their breaths while the men were…well, glad it wasn’t them.

Even David Robertson reacted in an incredibly appropriate way, giving an Oscar-worthy reaction to the misfortune that had befallen his starting catcher.

The good news? Sanchez seems to be perfectly okay. The bad news? His young daughter might not get another sibling.

Hey, at least he’s the starting catcher for the New York Yankees right? And at least the Yankees are winning, right?

Not even worth it. Some things are more important than baseball and, right now, we can only guess Sanchez is questioning his career choice.

Goodbye, functioning man parts! At least we won the baseball game (said no guy ever).