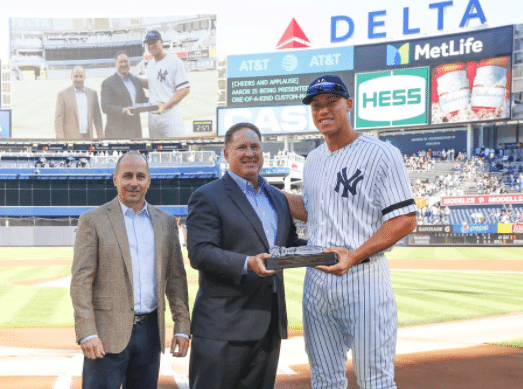 A crystal gavel for our favorite Judge!

The New York Yankees have gifted their rookie superstar Aaron Judge with a crystal gavel as a reward for his spectacular season.

In response to his historic rookie season, the New York Yankees provided Aaron Judge with specially made crystal gavel prior to Sunday afternoon’s matchup.

The gift is well deserved for Judge, who finished the season slashing .284/.482/.627 with 52 home runs and 114 RBIs as well as breaking the all-time MLB rookie single-season home run record.

Without Judge in the heart of the Yankees lineup this season, there is no telling whether or not they would have still found themselves in a playoff position. His impact has been irreplaceable.

Now after leading the American League this season in walks, home runs, and runs, the 6-foot-7 slugger will be turning all of his attention to bringing that offensive dominance into the postseason.

With the Wild Card game on Tuesday, hopefully Judge can use this crystal gavel to help him bring the Yankees deep into October baseball.

NEXT: Top Blockers: 5 Games That Cost the New York Yankees the AL East