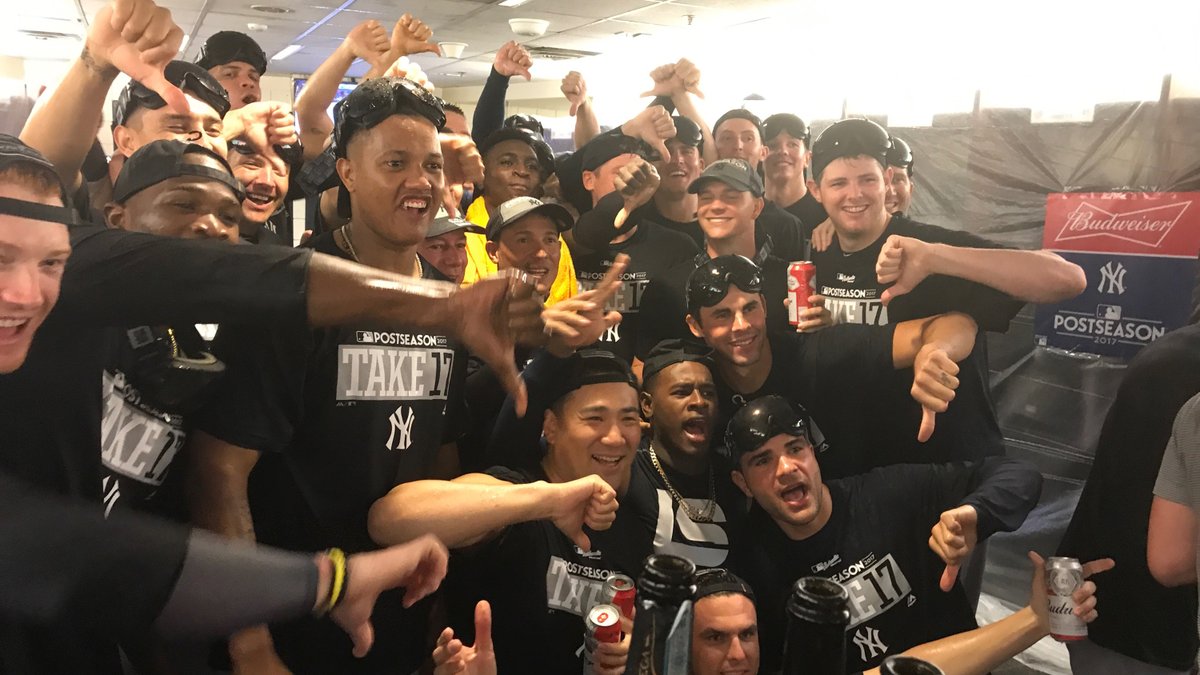 Their ticket has been punched! The New York Yankees clinched a playoff berth and had the time of their life celebrating in the clubhouse.

We never thought we’d see this day in 2017. The New York Yankees were projected to finish fourth in the American League East. Today, they clinched a playoff spot.

What a whirlwind of emotions for both the fans and the young members of the squad. The Yankees are going back to the playoffs!

Many disgruntled fans would argue that the Yankees still have to make it through the Wild Card game. However, at least they are getting themselves there.

Maybe we couldn’t be there firsthand for the celebration in the Yankees’ clubhouse but we saw it all on Twitter, our televisions and various Instagram posts.

Here are some of the greatest moments from tonight’s celebration…and no, John Ryan Murphy does not make an appearance (I wish).

Meredith Gets In On Fun

Meredith Marakovits always gets to hang out with these guys. Tonight they proved she is just one of the guys.

She got doused first by Chase Headley, next by a calm, cool Greg Bird and finally got the final dousing by Ronald Torreyes.

Hey, you have the option to wear the poncho when interviewing during the celebration. Guess she figured she would be safe.

Nobody is safe around these guys.

Sonny Gray: We show up to win EVERY DAY! pic.twitter.com/WI4Tr2XsGE

Sonny Gray FINALLY got the run support he needed today. He also got to pitch in what was ultimately the game that put them in the playoffs.

All in a day’s work for Gray, who got his time talking with the YES Network.

But Masahiro Tanaka could not be stopped. He snuck behind Gray and slowly and deliberately unleashed his entire beer over Gray’s head, nodding all along.

It’s good to see Tanaka having some fun and letting loose. This probably was one of the most entertaining moments of the postgame coverage.

We'll give Didi a pass on his postgame tweet tonight. ? pic.twitter.com/zTDsG8r5EI

Gregorius played a huge role in the Yankees’ run to the playoffs and his presence in the clubhouse has not gone unnoticed.

That is shown by him taking an absolute beating during his interview today by several players, including Baby Bomber Luis Severino.

And his smile shone through it all. We can’t get enough of our guy Sir Didi.

Gregorius may have gotten doused but he still had time to update his Instagram with a live video of what was happening at this time.

The excitement was absolutely contagious. I could watch this over and over again.

There was so much going on during this celebration that there just wasn’t enough time to cover it all. However, we can leave you with a few pictures shared on Twitter accounts, which made this day so incredible.

Stare at these all you want. Pictures are worth a thousand words an these are absolutely golden.

Today was a good day. ? pic.twitter.com/Wr02Aolfym