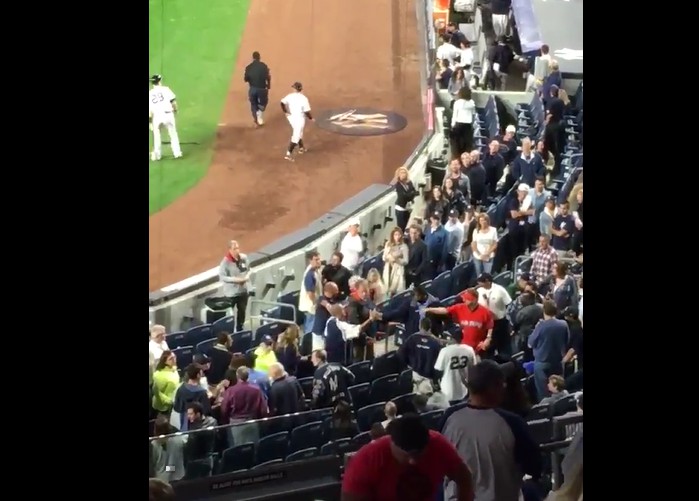 It looks like the Marlins Man does more than just sit behind the plate. It seems he’s breaking up fights at the New York Yankees game.

I always thought Marlin Man was a nuisance. A guy who consistently finds himself in home plate seats at New York Yankees and several more games, doing nothing but taunting me for not being able to afford it.

I guess I was wrong, as Marlin Man himself seemed to be helping to stop a fight that was occurring at tonight’s Yankees-Red Sox matchup.

In a video posted by Kenny Ducey on Twitter, a pretty gnarly fight was shown behind home plate and Marlin Man was right in the center of the controversy.

At first glance, it looks as though Marlins Man was involved in the fight. However, looking closer it seems as though he is explaining the situation to a security guard instead of actually doing the fighting.

Ducey also cleared it up in a follow-up tweet, stating that Marlins Man seemed as though he was, in fact, being a hero and not the villain.

Marlins Man is back near his seat, looks like he's trying to explain the situation to a security guard

We won’t truly know what happened behind home plate until we hear from either the security guards, Marlin Man himself or someone who was in the vicinity. So for now, all we can do is speculate.

However, it looks like Marlin Man was attempting to help and that makes him okay in my book.

For once, someone using their powers for good and not for evil. The only thing we should be chastising him for is wearing that heinous Marlins jersey in Yankee Stadium.