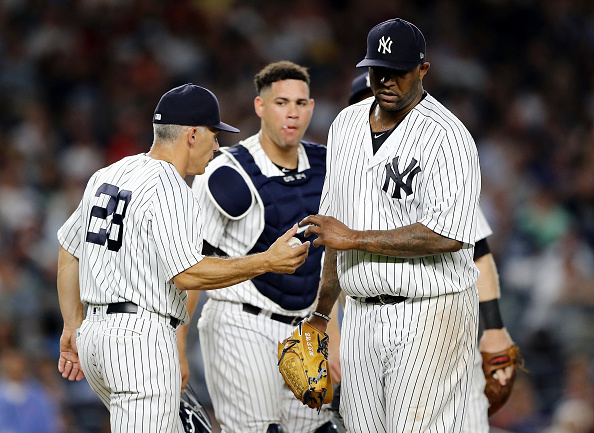 CC Sabathia struggled with the long ball as the Detroit Tigers evened the series in a nail-biter against the red-hot New York Yankees in the Bronx.

CC Sabathia has been a stopper for the New York Yankees all season long. Tonight, the home run killed him as the offense failed to capitalize on missed opportunities as the Bombers dropped Game Two in the three-game set.

The Detroit Tigers came out swinging against southpaw Sabathia, who earned himself two victories in his last three starts. However, those swings ended up putting the Yankees down early with no chance of coming back.

All was fine and dandy for the Yankees and Sabathia until the top of the second inning. With runners on second and third and one out, Sabathia gave up a long home run to John Hicks to give the Tigers a 3-0 lead.

Never to be outdone, the Yankees fought back right away, putting runners on first and second with two outs only to have the threat squashed by a ground ball by Todd Frazier.

The Tigers added to their lead in the fourth on a solo shot from Justin Upton. Early on, the Yankees found themselves down 4-0 to a team they hit silly last night.

Gary Sanchez led off the bottom of the fourth inning with a booming double to left field. All set up with no outs, Didi Gregorius took first pitch sinker into the right field seats to cut the lead in half.

Gregorius smashes a LASER over the RF wall & the @Yankees make it a 4-2 ballgame!#YANKSonYES pic.twitter.com/PsxSGuODz5

That blast marks Didi’s seventh home run since the All-Star break. He’s also batting .365 in that span to become on of the hottest hitters on the squad.

Sabathia settled down after the third, including putting the Tigers down in order in his sixth and final inning of work. He ended his night in line for the loss, while allowing six hits, four runs and striking out only three. This marked his 500th start of his career.

The Yankees continued to put runners on base but were unable to capitalize, which seems to be the story of their past few games. Matt Holliday hit a rare double with two outs only to get stranded in the sixth inning by Chase Headley.

As the Yankees bullpen preserved the score for the Yankees, they were unable to bring runners around the bases, leaving Brett Gardner stranded in the seventh.

However, the eighth was a completely different story. After an Aaron Judge pop-up, Sanchez followed up with a double to set the stage. Gregorius come through again with a clutch RBI single to bring the game to within one.

Sir Didi putting in that WORK!

David Robertson entered the game for the Yankees and got himself into a bit of a jam. However, as Houdini typically does, he got out of it…with a little help from Gardner.

With runners on first and second and two outs, Andrew Romine looped a single into center field. Gardner fielded the ball on one hop and fired a strike to Sanchez to tag out James McCann and keep the deficit to one.

The bottom of the ninth is typically the Yankees’ favorite inning, but Headley and Frazier quickly went down against former Yankee Shane Greene. However, pinch-hitter Jacoby Ellsbury walked and advanced to third on an error by Greene. With that, Gardner earned the intentional walk for the closer to face Clint Frazier.

While he’s done it before, Frazier failed to do it again, as he popped out to shortstop to end the game and have the series tied at one game apiece.

Regardless, the Yankees proved once again that they never give up. Even down to their final out, they made things interesting. Now, it’s time to look to the next one.

The Yankees look to put away the series against the Detroit Tigers in a Wednesday afternoon matinee in the Bronx.

The Bombers will send Masahiro Tanaka to the mound, hoping to capitalize on a stellar performance from the right hander last week. Tanaka went eight strong innings, allowing one run on two hits and striking out 14 against the third-place Tampa Bay Rays.

His counterpart will be the Tigers’ Jordan Zimmerman. The 31-year-old is also coming off a fairly strong performance, pitching seven innings and giving up three runs to the dominant Houston Astros.

Zimmerman is 6-8 on the season while Tanaka is 8-9 this year.