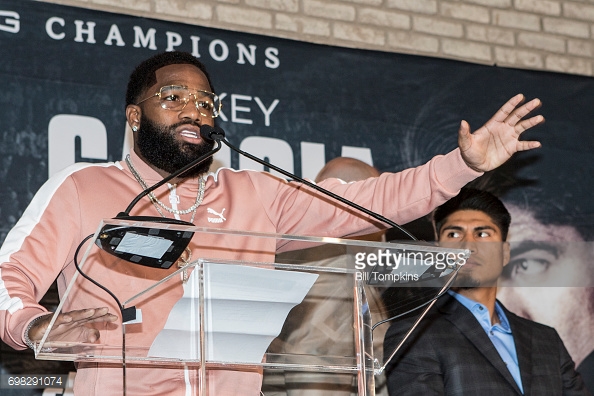 This time four years ago, Adrien “The Problem” Broner was undefeated and being groomed as boxing’s next superstar, and the heir apparent to Floyd Mayweather Jr as the next pound for pound king.

But then, in December of 2013, he suffered a humbling unanimous decision loss to Marcos Maidana and lost his WBA welterweight title.

Although he has won six out of his last seven fights since his loss to Maidana, he has seldom looked impressive.  In his last fight in February against Adrian Granados (18-5-2, 12 KOs), where he won by split decision, some felt that he got a gift decision since the fight took place in Broner’s hometown of Cincinnati, Ohio.

Not only has Broner struggled in the ring, but his dedication to the sport has been questioned by his weight and his run in with the law.

It seems weird that a fighter who has a professional record of (33-2, 24 KOs, 1 NC) and has been a champion in four different weight classes could be viewed as an underachiever. But that’s how most look at Broner.

Fortunately for Broner, he has a chance to silence his critics and rejuvenate his career as he takes on undefeated three division champion Mikey Garcia (36-0, 30 KOs) this Saturday night at the Barclays Center in Brooklyn, New York.

Garcia is one of the best pound for pound boxers in boxing and is the betting favorite to win on Saturday night. Broner is aware of this and is motivated for this fight.

He’s another star in boxing, and he’s undefeated,” Broner said of facing Garcia. “Of course, it’s a hell of a fight for me, and it’s definitely going to be a defining moment for Adrien Broner.”

The fight will be contested at the junior welterweight limit of 140 pounds, which is five pounds heavier than Garcia has ever fought at. This should be an advantage to Broner, who has fought at welterweight before and his only two losses came against naturally bigger men in Maidana and Shawn Porter.

If Broner is going to win, he will have to remain focused, discipline and to make sure he doesn’t fade in the second half of the fight.

If he can pull off the upset, it will be the biggest win of his career and will get him in line for more big fights and re-establish his star power. If he loses, then they’ll be a huge cloud over his boxing future.

The fight will be televised on Showtime at 9 P.M ET.

NEXT: Errol Spence Jr. Is On the Verge Of Becoming Boxing’s Next Star