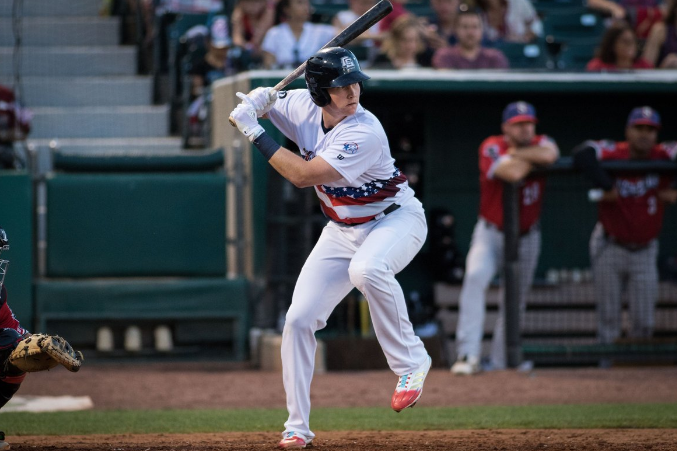 Welcome to the Yankees family, @CoopaLoop1!

What’s next for the New York Yankees first base shuffle now that 26-year-old Garrett Cooper is in the mix following Thursday’s trade?

Over the last two days, the New York Yankees first base picture got a whole lot more interesting — as if it hasn’t been all season.

On Thursday, general manager Brian Cashman made his first notable trade of July by trading left-handed reliever Tyler Webb to the Brewers in exchange for first base prospect Garrett Cooper. Although this was considered more insurance for Greg Bird, who has been crippled by an ankle injury all season, the addition of Cooper suddenly seems more striking.

Bird did take batting practice and ran drills with the Staten Island Yankees this week, but things still aren’t looking bright. The 24-year-old has an Os Trigonum which is defined by accessory ossicle together with surrounding soft tissues can become wedged between the tibia, talus and calcaneus, per Physiopedia. Bird had a Novocain injection in the area and the next step is either a Cortisone shot or surgery.

To keep it blunt, Greg Bird’s 2017 season is likely finished. Which is why Garrett Cooper, who was promoted to the Yankees after being assigned to Triple-A Scranton/Wilkes-Barre has become so important.

Cooper is a 26-year-old right-handed hitter who hit 17 home runs and batted .366 with a .428 on-base percentage in 75 games for the Triple-A Colorado Spring Sky Sox. That also earned him a trip to the Triple-A All-Star game and now, with the Yankees slated to face lefties Drew Pomeranz, Chris Sale and David Price in Boston, Cooper will get his shot.

Assuming Cooper replaces Ji-Man Choi, he will become the eighth different starter at first this season. The Yankees rank 29th in WAR (-1.2) among Major League teams this season and although the bar has been set extremely low for the Brewers’ 6th round pick of the 2013 MLB June Amateur Draft out of  Auburn University, this is his chance to win the first base job until Greg Bird is healthy again.

If not, Cashman anticipates that another first baseman will be out there on the market and as long as the price is reasonable, assets like Mets’ Lucas Duda, Royals’ Eric Hosmer or A’s Yonder Alonso make sense. But after all the experiments — like Chris Carter — expect Cooper to be the last trial run until the Yankees staying engaged in potential talks for an answer to their first base woes.