The 2016-17 Golden State Warriors are damn good, but are they the best we’ve ever seen? We rank the greatest NBA teams.

Yes, sir and yes ma’am, it’s all over. One of the least competitive NBA seasons and NBA Finals of our time concluded on Monday night when the Golden State Warriors handled the Cleveland Cavaliers in taking home the franchise’s second title in the last three years and fifth overall.

Superstar Kevin Durant has now officially completed the mission of winning his NBA Championship after joining the greatest regular-season team in NBA history, the 2015-16 Dubs.

Most hate it. Most also join the fray in congratulating him on winning that chip because this is our society now. It’s better to win the chip the easy way than fall short the hard way.

To me, Durant’s 2012 and 2016 playoff campaigns were much more impressive than what we witnessed the last two weeks. To me, that chip isn’t everything. To me, competing at the highest level in order to beat that team who embarrassed you (3-1 comeback) rather than joining them showcases the highest amount of character and competitive spirit possible.

But that’s another story for a different depressing NBA day, the story of these world-class athletes fooling the public into thinking them taking less money is selfless, rather than selfish (helping win a title). It’s not like they’re standing on the unemployment lines.

Man, I’m way off track now. See what happens when history is at stake and so many so-called experts are allowing themselves to get carried away while they dub the Dubs the greatest team in history? Thanks, LeBron James, you started this madness of uncompetitive NBA basketball in the highest degree possible.

Anyway, today, we speak about great things. Today, we try to gather exactly where this killer team ranks among the greatest of all-time.

The only team to make it on this page that didn’t win the title is the 2015-16 Golden State Warriors. When 73 games are won, it makes sense. The 67-win San Antonio Spurs in 2016 and 66-win 2009 Cleveland Cavaliers are close, but to no avail. Only the Dubs and their defeat at the hand of an immortal LeBron James deserve to make the notables as a championship-less squad.

Listen, you can come at me with all the math in the world. I don’t care. When a 57-win team knocks off the greatest regular season team in history, the 73-win Dubs, they deserve a mention, and that’s exactly what James’s 2016 Cavs did.

The feelgood story of the 2003-04 Detroit Pistons, while they didn’t surpass the 60-win barrier (54), still rank as the third best defense statistically in league history (84.26 points allowed per game).

Now, onto the big show:

Take a quick glance at what the Bad Boys had to go through en route to the organization’s first NBA Championship. Nearing the end of a decade that saw Magic Johnson and Larry Bird revitalize a struggling league, the Detroit Pistons were forced to plow through not only the three-time champion Boston Celtics, but the Los Angeles Lakers in the NBA Finals. Oh yeah, they were also forced to hold off a guy named Michael Jordan along the way.

Isiah Thomas remains one of the most underrated stars in NBA history and with the likes of Bill Laimbeer, Dennis Rodman and Joe Dumars, this squad can easily be labeled the greatest defensive unit of all-time.

Around these parts in this day and age, this team is sorely missed. We miss the teamwork, the brotherhood, the five men for one outlook Red Holzman‘s collection deployed on a nightly basis.

The only aspect of the season making this squad more memorable than its actual place in history is the heroic effort of Willis Reed in Game 6 of the NBA Finals. With Walt “Clyde” Frazier at the point, this team has a chance against any team over the last seven decades.

Honestly, there must be a team on this list from Bill Russell‘s NBA reign of terror and it comes in the form of the 1964-65 season. Winning 62 games out of 80, this Boston squad didn’t coast through the playoffs only winning eight of 12.

Even still, John Havlicek had arrived on the scene in representing the final member of the most dominant Bill Russell-led Celtics teams.

The team of the hour comes in at the No. 7 spot. Those who’d like to see them higher on the list point to the 16-1 playoff record. They look at a top three player in Kevin Durant joining a 73-win squad and wonder how they can’t be somewhere in the top three.

Well, for us, it’s quite simple: the competition they dealt with doesn’t compare to other teams and eras.

The simple act that was KD leaving Oklahoma City and heading west took out the Dubs top competitor in the Thunder. Then, with Kawhi Leonard‘s injury in Game 1 of the western conference finals, the road turned out to be even easier.

Adam Fromal of Bleacher Report has them as the No. 3 squad, using his own unique blend of NBA Math. Sean Deveney of the Sporting News calls these Dubs the greatest team ever simply thanks to its record-breaking 13.5 margin of victory during the playoffs. 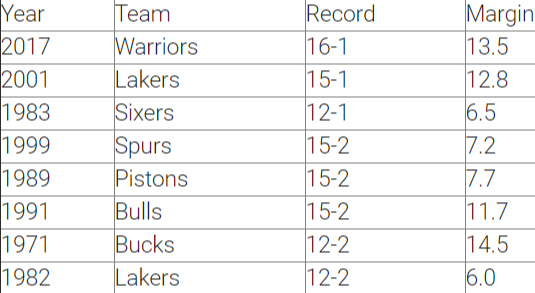 Nonsense. An NBA team’s greatness cannot simply be measured by a single statistic or by numbers. The level of competition matters. Circumstance matters.

While LeBron James and his Cavs presented a challenge, that’s all they had to deal with. There weren’t any Patrick Ewing-led Knicks, Reggie Miller-led Pacers or Wilt Chamberlain-led Lakers to get through. They deserve top 10 mention, but not top five. Let’s respect history just a bit more than the average, overreaction NBA guy.

The second Boston Celtics team to make the top 10 comes in the form of Larry Bird leading the way. Unfortunately and ironically, it wasn’t the familiar Magic-led Lakers who they took out in the finals. Instead, the opponents were the Houston Rockets.

One year after he allowed the Rockets to get the better of him, Magic came back with a vengeance. Leading his Lakers to 65 wins and breezing through the west with a 15-3 mark, Johnson and Kareem Abdul-Jabbar led the way to the organization’s fourth title of the decade, and second to last (as they would repeat the following year).

Fromal puts the squad at No. 7. I think that’s a little disrespectful not from a ranking standpoint, but who he has ranked ahead of them. This team battled back in the west and not only knocked off the defending champion Celtics in six games in the finals, but finalized the fast-breaking tagline of the Showtime Lakers.

The squad finished the season averaging 117.8 points a game complimented by a 115.6 offensive rating, ranking them first in the NBA.

The 1970-71 Milwaukee Bucks are always the darkhorse on the NBA greatest teams list. Some chose to ignore them and throw ’em in the bottom half of 10 while others skyrocket them to No. 1 or 2. We decided to put them right where they belong at four.

The duo of Lew Alcindor and Oscar Robertson remain, arguably, the greatest one-two punch in the history of the game. After winning 66 games during the regular season, they coasted through the tournament with only two losses and then swept away a tough Washington Bullets squad in the finals. At the time, those 66 wins ranked as the second most in history.

Yes, the 1971-72 Los Angeles Lakers remain the greatest team in the organization’s proud history. Wilt Chamberlain, Jerry West, Gail Goodrich, Elgin Baylor … are you kidding me? They also knocked off a legendary squad in the Knicks in just five games in the NBA Finals.

At the time, the 69 wins ranked the greatest mark and lasted until 1996. The squad finished first in offensive rating and second in defensive rating, making for a dangerous mix on both ends of the floor while the competition remained steep.

Finally, after failing in the NBA Finals the last seven out of nine years, they captured their moment in stellar fashion.

When you defeat Bill Russell and put an end to a 10-straight championship streak, as the Boston Celtics had going for them, you deserve to be in the top two on this list.

Scoring 125.22 points a contest, this team remains third on the all-time points per game list, trailing only the 1982 Denver Nuggets and 1962 Philadelphia Warriors.

At No. 1 still remains Michael Jordan‘s most perfect masterpiece, the 1995-96 Chicago Bulls. Just thinking about a guy winning a title in ’93, playing baseball for the next two years in exile and then coming back to lead the greatest team of all time in ’96 still blows the mind of many.

To be honest, the stat geeks out there still get hung up on the two NBA Finals losses to the Seattle SuperSonics. It’s silly, really. Chicago stormed out to a commanding 3-0 lead only to see Shawn Kemp and Gary Payton put up a fight in the next two games. We all knew what the conclusion would be.

Here's the REAL list, as it pertains to the NBA's greatest teams. #NBA. Talk amongst yourselves. pic.twitter.com/yNxU2uQWv5

According to Fromal’s NBA Math, this is the squad who leads the way historically in terms of team ratings with a mark of 106.38.

For the traditionalists, think of the stiff competition the likes of MJ, Scottie Pippen and Dennis Rodman were tasked with. There were the Ewing-led Knicks, a thorn in the side of this great team for an entire decade. Miller’s Pacers were steadily climbing. The tough and rugged Pat Riley Miami Heat were at full strength. And last but not least, Shaquille O’Neal and his hotshot Orlando Magic just came off ousting MJ during his comeback year while capturing the 1995 east title.

It was old-school, roughhouse basketball and the Bulls not only prevailed, but did in style with storylines and mesmerizing moments to boot.

The 1995-96 72-win Chicago Bulls are still the greatest NBA team of all-time led by the greatest player in court history.

NEXT: Why Would Melo Want To Play With the Clippers?