Aroldis Chapman may throw the ball over 100 MPH for the New York Yankees but that’s not the pitch that he should be known for.

Facing New York Yankees closer Aroldis Chapman in the depths of the ninth inning with the game on the line is…well, terrifying to say the least. But maybe not for the reason that everyone thinks.

Sure, he can deliver a four-seam fastball to the plate faster than you can blink. After all, he IS referred to as the Cuban Missile. However, as impressive as that is, that is not his most impressive pitch.

Chapman may rely on the fastball but he is getting better results with his devastating slider. The issue is, the fastball gets all the attention amongst fans.

How many players have you seen fire a pitch at 105.1 MPH? Not many. And that’s why fans eat up the velocity of his fastball over the success of his slider.

A three-pitch pitcher, Chapman utilizes the fastball, the slider and a modest change-up, which still has room for improvement. Velocity is great but movement makes him even more dangerous in the later innings.

According to Brooks Baseball, Chapman has utilized his fastball 70.16 percent of the time on the mound this season. He has only used the slider at a small percentage of 20.16 and the change at 9.68 percent. He consistently uses the fastball to blow by opponents.

But is he really blowing opponents away? This season he’s thrown 87 fastballs with only 32.2 percent for strikes. While the slider is a smaller sample size (only 25 pitches thrown this season), 56 percent have been thrown for strikes.

Maybe it’s the movement of the pitch, but eight percent of his sliders thrown this year have been put in play. All of those balls in play have been lazy pop ups.

And we’ve seen the fastball and slider quite often. While the speed of the fastball is appealing, the sweeping movement of the slider seems to be more effective for Chapman on the mound. He uses the slider sparingly when it has the stats show he has a lot of success with it. 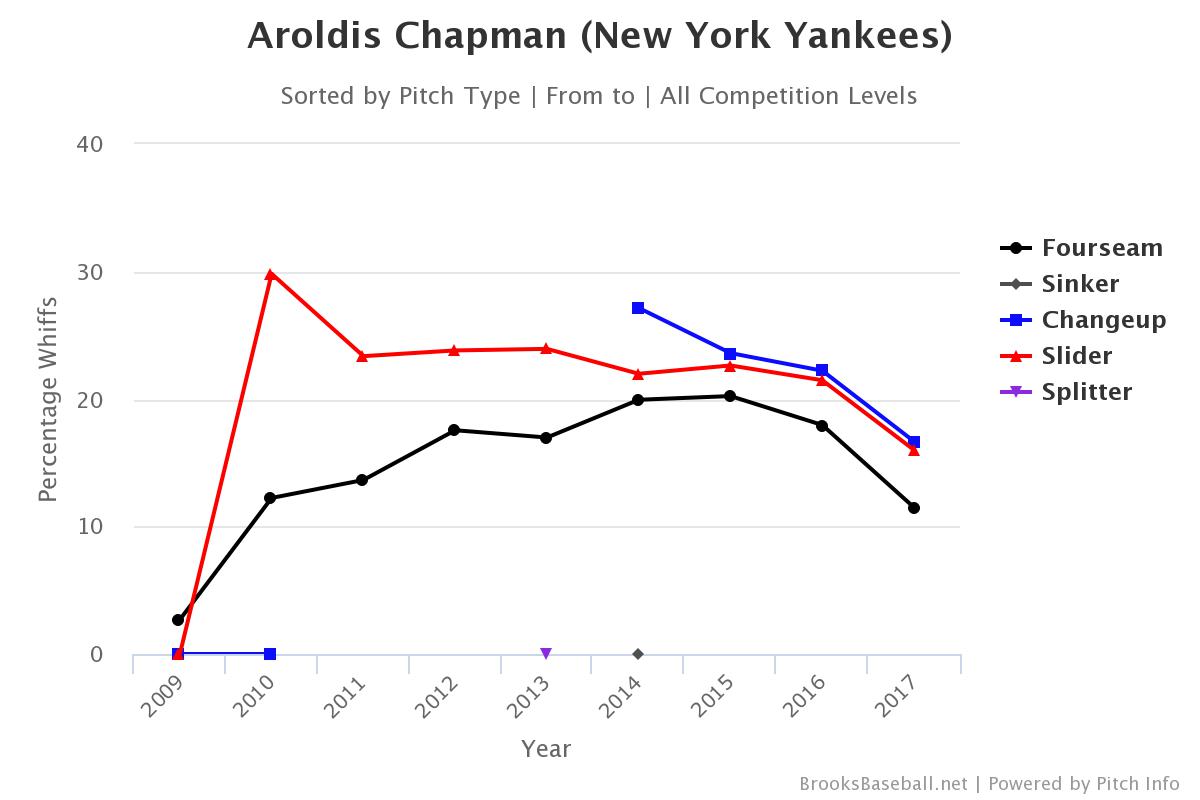 Wednesday night against Boston was one where Chapman relied heavily on the fastball. He threw 25 fastballs out of 33 pitches and ultimately could not find the plate. Speed is one thing but without accuracy, it means nothing.

Chapman should certainly continue using his fastball frequently but his focus should be on further developing the pitch that is actually getting opponents out. That slider has helped transform him into the dominant pitcher he is today, despite the fastball taking all the attention.

If I was facing Chapman with the game on the line, I would be more afraid of his sweeping slider than his fastball. The fastball may be coming in at a higher speed but the movement is just downright disgusting on Chapman’s slider.

??⚾ This Aroldis Chapman slider though ? #Filth (via @MLB) #BronxBombersAreBack pic.twitter.com/Pkbya87Xh7

He’s retired many a solid hitter on that unexpected pitch, even though his average slider averages at about 88 MPH. That’s where he lets the movement take over and finish the job.

Many scoffed at the Yankees signing a flamethrower for a risky contract. However, looking at just how he utilizes his impressive arsenal, the Yankees may have gotten it right.

He’s certainly no Mariano Rivera but he is getting the job done. It’s not a cutter he utilizes but a fastball, although that slider has the makings to be a dominant signature for him.

Forget the fastball, guys. It’s not all about the speed. It’s about the filth and that is what Chapman is using to send his opponents right back to the dugout.

NEXT: New York Yankees: The Fix That Brought Luis Severino Back