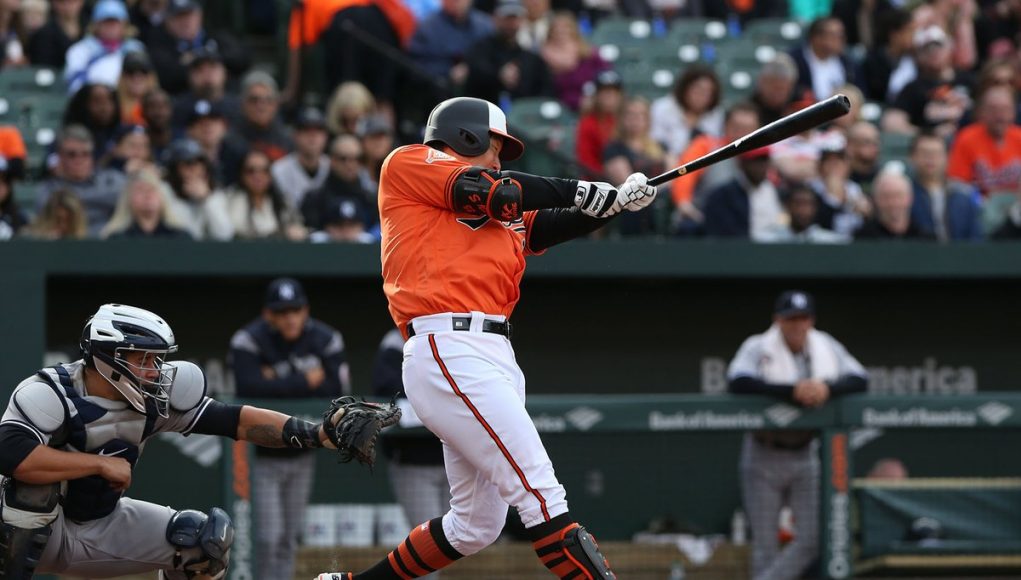 In short: O's on top! pic.twitter.com/yvcUq5dyar

Despite leading after six innings for the second straight night, the New York Yankees were unable to take down the undefeated Baltimore Orioles.

The New York Yankees couldn’t quite avoid losing back-to-back series to start the 2017 season as they dropped a 4-1 lead against the Baltimore Orioles on Saturday afternoon.

Masahiro Tanaka, looking to erase a dismal Opening Day start in Tampa Bay, got the starting nod in the middle game and while he wasn’t smacked around like he was on Sunday, the Yankee ace wasn’t all that sharp.

Over five innings of work, Tanaka surrendered three runs on six hits and walked four. The righty also hit two batters compared to the three he hit over 199.2 innings pitched in 2016.

Kevin Gausman got the ball for the Orioles coming off utter dominance against New York at home last season. The righty gave up just 1 ER over 20 innings vs his American League foes at Camden Yards (0.45 ERA) but was tabbed for all four Yankee runs this afternoon on eight hits.

Offensively for Baltimore, it was Hyun Soo Kim who led the way with a 3-for-4 day including the go-ahead single in the seventh, but four different Oriole batters recorded a RBI for a unique all-around effort.

For the Yankees, Ronald Torreyes went 2-for-4 with a two-run single in the top of the second inning for his team-leading fourth and fifth RBI’s of the season.

New York got on the board first in the bottom of the second thanks to fill-in shortstop Ronald Torreyes. After a Chase Headley walk and Aaron Hicks double in the top of the second inning, Torreyes squibbed one the other way to right field for a two-run single to make it 2-0 Yankees.

Ronald Torreyes gets the party started with a two-run single as the Yankees take an early 2-0 lead in Baltimore. #YANKSonYES

Two innings later, the Orioles answered right back on a Welington Castillo two-out RBI single to center to score Manny Machado. Tanaka then surrendered a hit to Hyun Soo Kim then hit Jonathan Scoop but forced out Castillo out at home to end the bases-loaded threat.

Machado walks, steals second. With two outs, Castillo drives him home with a single to CF. #Orioles now trail 2-1 in the 4th. #Birdland

In the top of the fifth, the Yankees would strike next in the form of a balk by Kevin Gausman with Austin Romine on third and Jacoby Ellsbury on first to make it 3-1. Starlin Castro, who was up during the balk, then smacked on through the 5-6 hole for a RBI single to make it 4-1. Yankees.

In the very next inning, however, Machado ripped a sharp double to deep right field off the wall to score Seth Smith then, with the bases loaded, Tanaka got Mark Trumbo to ground to Ronald Torreyes who couldn’t quite turn the double play with his doubple play partner, Starlin Castro. As a result, Adam Jones scored on a fielder’s choice to make it 4-3.

Mark Trumbo is ruled safe after review. Orioles down 4-3 with runners on the corners and one out. #Birdland

By the time the contest rolled into the bottom of the seventh inning, New York was still up by a score of 4-3 but the Orioles had a rally in their bones.

After Chris Davis doubled off Tommy Layne, manager Joe Girardi went to 2016 All-Star setup man Dellin Betances who served up a RBI single to Mark Trumbo then stole second base with Kim at the dish. The very next pitch was lofted into right field in front of Hicks for a base hit to score Trumbo from second and just like that, Baltimore took a 5-4 lead.

Was there ever a doubt the #Orioles were coming back?! #IBackTheBirds pic.twitter.com/meFzk5Hq7S

Brad Bach pitched a scoreless eighth then closer Zach Britton came on to record his 52nd consecutive save to secure the Orioles’ fourth win in as many games to begin the season.

Call it a comeback! Kim's game-winning RBI in the 7th gives the O's a 5-4 win over the Yankees! #IBackTheBirds pic.twitter.com/6qak6Q2woM

Win column! @zbritton shuts em down in the 9th for his 52nd consecutive save. #Birdland pic.twitter.com/gDHp4KYJoy

While Tanaka reached as high as 98 mph on Saturday, his command was all over the place. In five innings of work, the righty walked four batters and hit two.

To put that into context, that makes him just the seventh Yankees’ pitcher since 2000 to walk at least four batters and hit two as well. The last pitcher to do that was Michael Pineda on May 11 of 2016 and before him, it was Ivan Nova on April 3, 2014.

Tanaka is the seventh #Yankees pitcher since 2000 to walk at least four and hit two batters in a single game.

After taking a hard swing on a 3-2 count in the top of the fifth inning against Kevin Gausman, the Yankees catcher Gary Sanchez crouched and seemed to be favoring his right elbow. Shortly after taking a practice swing, he grimaced and stopped the swing about 25 percent of the way through.

Austin Romine replaced Sanchez mid at-bat and drew a walk and we later found out that the 24-year-old phenom suffered a right biceps strain.

There is no timetable on his return, whether time on the disabled list will be needed or really if the strain is serious or not. More information will be provided, but you’ll still see Triple-A catcher Kyle Higashioka make a trip to Baltimore for Sunday’s contest.

At Least It’s Not His Wing…

Yankees’ first baseman Greg Bird was excluded from Saturday’s lineup with a bruised right ankle from fouling a ball off that ankle last week in Clearwater.

General manager Brian Cashman isn’t worried, however, and the lefty is expected to return to the lineup for the Yankees’ home Opener on Monday.

This Day In Yankees History:

The 1997 Hall Of Fame inductee made the start against the Boston Red Sox that day and surrendered five earned runs over four innings of work in an eventual 9-2 Yankees’ loss. Niekro played in just two seasons in the Bronx and posted a 3.59 ERA over 65 games (64 starts).

In order to avoid being swept in a three-game set in Baltimore, the Yankees will hand veteran left-hander CC Sabathia the ball for the second time this season.

Sabathia, 36, held the Tampa Bay Rays to no runs over five innings pitched while inducing eight groundball outs on Tuesday. He put on a show at Camden Yards in 2016 by holding the O’s to one earned run over 18 innings in three starts (0.50 ERA).

Going for the Orioles will be Wade Miley, who is slated to make his first start of 2017 after battling a bad case of the flu bug during spring training. Last season, the lefty made 11 starts for Baltimore last season and posted a 2-5 record with a lofty 6.17 ERA.

You can catch the action on the YES Network or MLB Network at 1:35 or tune into WFAN. ESNY will, like always, provide a full preview and postgame analysis for everything that goes down in the last of three from Oriole Park.

NEXT: This Is The Brett Gardner The New York Yankees Want To See