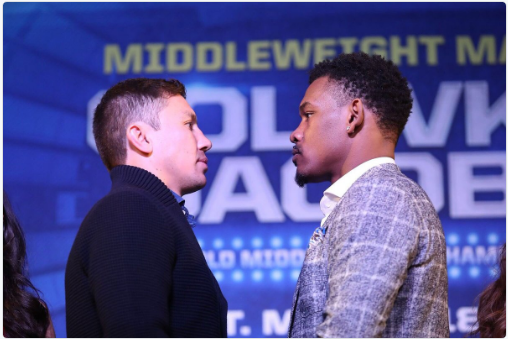 I haven't come this far to give up…I'm scared of no man, I fear nothing. #MiracleMan

Daniel Jacobs is an 8-1 underdog against Gennady Golovkin at Madison Square Garden next month, but wants to know what GGG has done to earn that respect.

Gennady Golovkin (36-0, 33 KOs) dominates the guy in front of him, that’s his m.o. GGG has knocked out 23 straight opponents. Some, however, feel he’s torn through weak opposition. Count his next opponent, Brooklynite Daniel Jacobs, as part of that crowd.

Jacobs (32-1, 29 KOs) is battle-tested, most boxing fans know his story. He’s the only fighter in boxing history to survive cancer and return to win a world championship (he holds the WBA belt). His 88 percent KO ratio isn’t far behind GGG’s absurd 92 percent mark either, both guys can end fights stat.

Golovkin (-800) is a heavy favorite when the two square off March 18 in New York City. Jacobs still isn’t convinced.

“The work they have done [to build up Golovkin] has been excellent. They have placed him against opponents who were in the final part of their careers, they were not genuine middleweights and it gave the impression that he was devastating everyone,” Jacobs said. “He’s being placed [in a position where he is] the best in the world, but in reality he hasn’t proved that yet.”

GGG has been accused by some of avoiding fights with Andre Ward and Erislandy Lara. He’s been waiting on a fight with Saul Canelo Alvarez and hasn’t taken huge risks in between. He last stopped Kel Brook, a good fighter who was two weight classes too small.

Jacobs, on the other hand, represents a legitimate challenge to Golovkin in the minds of boxing fans. He’s not so arguably the best opponent GGG will have faced, and he knows it. Now he must show and prove.