The pressure is on Jacoby Ellsbury to live up to his contract with the New York Yankees, and a flaw in his swing is making it impossible.

The New York Yankees find themselves in an ugly marriage with Jacoby Ellsbury that many see ending in an even uglier divorce.

It didn’t start out that way, as New York justifiably put a $153 million ring on one of the best outfielders the game had to offer.

RELATED: The hot corner should be a hot topic for the New York Yankees

However, all general manager Brian Cashman can do now is weep in dismay on why the man that finished second in the AL MVP voting in 2011 has crumpled into mediocrity.

Basically, once upon a time, Ellsbury was one of the best outfielders the game has to offer while now, saying he’s a shell of himself is probably putting it modestly.

It’s not just on the field, as New York has displayed no dependence on Ellsbury as a veteran leader that has won two World Series and has played in 39 postseason games.

Take the benching in 2015’s Wild Card game, and being benched in multiple “must win” games last season as prime examples.

But what happened? What possibly went wrong that one of baseball’s stars has been unable to live up to the number of zeros pasted on his paycheck?

Some point to the fact that he can’t stay on the field, but he’s played in 136 games per year with the Yankees compared to 102 with the Red Sox.

Perhaps we’ve blamed the wrong reason, while completely ignoring the evidence that sits right in the obscure record Ellsbury set in 2016.

For those unaware, Ellsbury set the single-season record with 10 catcher’s interferences in 2016 and is second on the all-time list, with 24. Unique, right? Well, unfortunately, it’s not an ideal kind of unique.

Coincidence? Not quite. In fact, what’s the mechanical reason behind a swing that consistently makes contact with the opposition’s catcher? Well, it’s actually one of the most common hitting problems.

Take a look at this screenshot of a slow-motion gif, made by pastime athletics, of a Jacoby Ellsbury home run from his glory days in Boston: 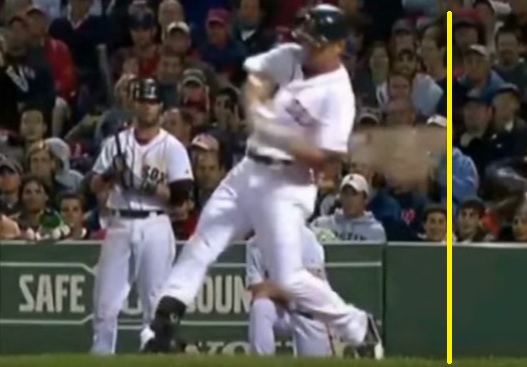 Note where the end of his bat is as his swing begins. There is about an estimated foot between the lumber and the catcher’s glove while as you look at the following screenshot, the point in which Jacoby makes contact with this home run is made inside the front foot: 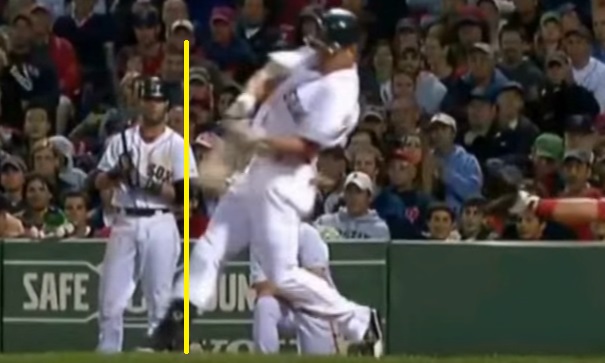 This swing is short, compact and to the point (literally) and, as mentioned, it resulted in one of the 65 home runs he smacked while representing the Red Sox.

Throughout the duration of the swing above, watch how the back elbow proceeds tight to the rib cage while the barrel of the ball remains level with the hands — to avoid dragging the barrel and promoting a line drive tendency.

This approach also keeps the hands “inside the ball” which keeps you from stretching out the front arm and sweeping the barrel around to the point of contact.

Speaking of sweeping the barrel, let’s shift our focus to a swing from this past season: 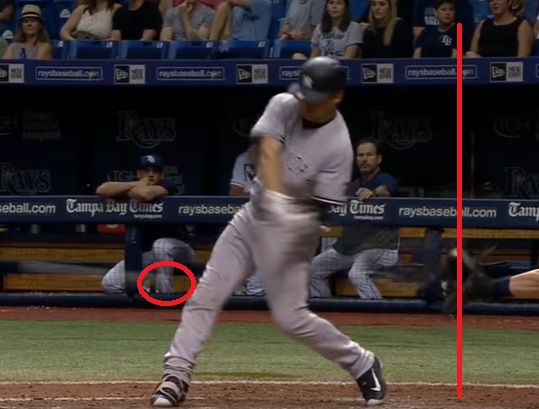 Now, the first mistake Ellsbury makes is probably the most common imperfection one could see in a hitter’s swing.

The front arm is completely extended immediately which usually leads to a hitter being slow to the ball which consequently leads to them being late on a good fastball.

This particular swing was actually a 92 mph knee-high meatball from Tampa Bay Rays’ righty Matt Andriese and notice how it’s already in the picture as Ellsbury’s swing is a quarter of the way through.

Worst of all, this ordinary fastball eats the former silver slugger up, as the point of contact is about five inches further than it was in the previous image. 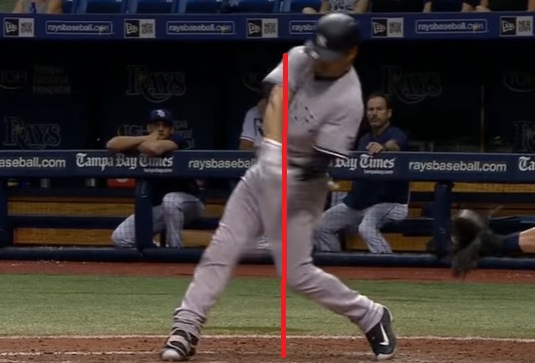 This swing completely diminishes the opportunity for Ellsbury to make good consistent contact and certainly gives the pitcher a chance to get away with mistakes or even exploit him to perfection with a breaking ball.

With Ellsbury’s hands way above the barrel in the picture above as he follows through, the front elbow rises up, causing the barrel to drop and loop around the hands.

In correlation, the elbow shoots downward near the back hip which, as the swing progresses, results in the front shoulder lifting higher producing an abnormal tilt.

All that habit does is promote swing and misses, lazy fly balls and jam shots.

Keeping that elbow in without watching it fall to the dirt will increase his capability of keeping the front shoulder down while thrusting the knob of the bat down and to the inside of the baseball.

It’s extraordinarily night and day for the former all-star, especially if you look at where the contact is made in the first image compared to the second.

The key for Ellsbury is to attempt to get that point of contact back towards the front foot while avoiding premature extension.

Thankfully, hitting coach Alan Cockrell is working to get bring back his center fielder’s swagger.

“You want to see the ball a little bit better, your timing gets messed up, you’re late and the ball is beating you deep,” Cockrell told the NY Daily News. “If we can just simplify it, we need to move contact out front. He’s a big-league hitter and he’s going to get himself ready to hit. It should help.”

So, yes. After three years and over $63 million handed to a former superstar, his production has gotten so disheartening that one would wonder if Cashman is thinking about eating a ton of money for his release.

However, there’s an explicit blemish in his mechanics and the outfielder has the potential to shift this “marriage in shambles” to a “happy ever after.”

Nonetheless, it won’t be easy. Hours upon hours of work with Cockrell will be needed to salvage this contract. The question is: is he willing to put in the work?

If that answer is an astounding “yes,” then his presence could reconstruct the Yankees’ offense with a top of the order strength and an influential table-setter for the middle of the order — something Ellsbury has yet to be (consistently) in the Bronx.

NEXT: Yankees are in a sticky situation with Masahiro Tanaka