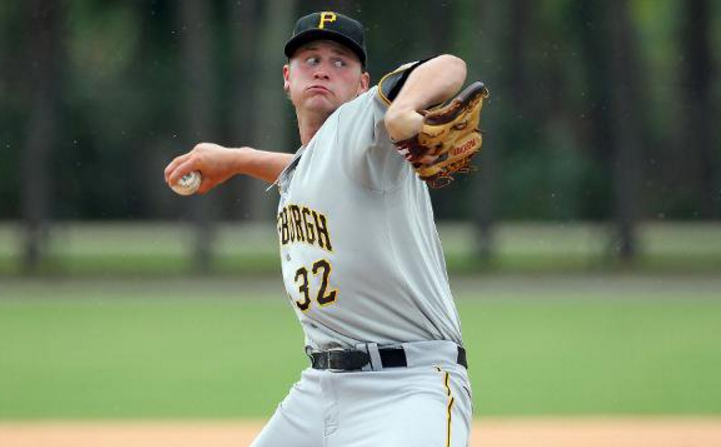 Like a 1990s one-hit wonder, #Pirates Colten Brewer gets back up when he's been knocked down: http://t.co/M0fjQDMUcA pic.twitter.com/1LixMwLMr4

In this edition of ESNY’s New York Yankees Prospect Profile, we take a look at newly-acquired right-handed pitcher Colten Brewer.

In the 2016 Rule 5 draft, the New York Yankees lost eight prospects to other teams, but they did draft one for themselves, right-handed pitcher Colten Brewer.

Brewer was selected by the Yankees in the second round from the Pittsburgh Pirates, the team who drafted him. The right-hander was taken in the fourth round of the 2011 MLB June Amateur Draft out of Canton High School in Canton, Texas.

The right-hander relies primarily on his fastball for his success, but he also has a curveball that he has been working on that has the potential to become a wipeout pitch. He also throws a changeup which is a tool in his arsenal that could use some work.

Take a look at what scouts have to say about the rest of his skills:

As seen by the grades, scouts have only given Brewer one above average rating and that is for his fastball. His fastball usual sits between 92 – 95 m.p.h. but has peaked at 96. It is his best pitch that scouts feel could be his key to the majors.

The 24-year old began his professional career in 2012 with the Gulf Coast League Pirates where he went 1-3 with a 3.24 ERA and 18 strikeouts in eight games pitched, this performance led him to receive a promotion for his second year as a pro.

Brewer only pitched three games with the Pirates Low-A affiliate before being bit by the injury bug and being forced to miss the rest of the 2013 season as well as being absent for the entire 2014 season.

Despite suffering an injury, the right-handed would not let this set him back from his goals and came back for the 2015 season looking to prove to himself that he can overcome adversity. In 2015, Brewer struggled a bit with a 4.90 ERA in 22 starts with 99 strikeouts, going 5-9.

In 2016, the 24-year old came back to Earth and improved from his previous campaign with a 4.09 ERA with 66 strikeouts in 18 games and was used partially as a reliever. The stats do not pop out to you but he has shown improvement since returning from injury which is a good sign.

The expectation the Yankees most likely had for him when selecting him in the Rule 5 Draft was most likely hoping he can cut it as a back-end starter, but the mainly got him for mid-relief depth.

Judging by the minimal pitch repertoire and having only one above average pitch, it seems like Brewer might have to be converted to a reliever full-time, but only time will tell.

NEXT: Additional moves the New York Yankees could make this offseason