With a win on Friday, Djokovic reaches a milestone no tennis player or golfer has ever achieved.

Novak Djokovic is one of tennis’ so-called “Big Three.” With Roger Federer and Rafa Nadal, Djokovic has dominated more than the past decade. Those three have owned professional tennis and entertained millions along the way.

With his straight-set win against Denis Kudla on Friday morning, Djokovic beat both Federer and Nadal to a significant milestone in tennis history.

Djokovic is the first professional tennis player to reach $150 million in winnings. He also owns five of the 10 highest single-season prize money totals in history.

If Djokovic — the overwhelming favorite — can win the Wimbledon final on Sunday, he will tie the record of 20 Grand Slam titles shared currently by Federer and Nadal.

Purse equity has long been an issue in professional sports. Tennis has actually been well ahead of the curve in many regards, but the records are still incredibly far apart.

Serena Williams, the GOAT, holds the WTA Tour record for career winnings — but at only $94.5 million. And her total is more than double the second-highest winnings win women’s history, her sister Venus ($42.2 million).

The only professional golfer to reach $100 million in career winnings is still Tiger Woods ($121 million). Phil Mickelson is still chasing the ninth digit on his career total.

NASCAR drivers have to split their winnings with their team and car owners. Jeff Gordon won approximately $154 million in his career with Hendrick Motorsports. 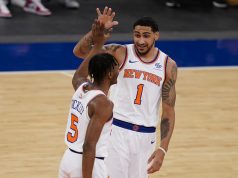