Five games back of first place in the American League East division.

Near the bottom of the American League and MLB as a whole.

That’s how rough the New York Yankees‘ 2021 start has been, but despite all that, bettors are still believing in the Bombers advancing to the World Series later this year. 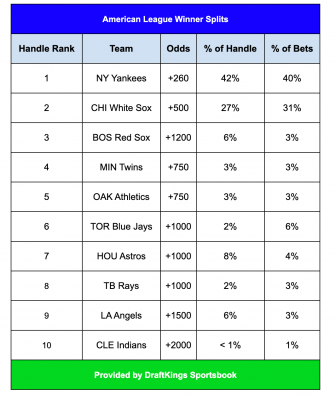 The Yankees are responsible for over one-third of the handle and number of bets — respectively sitting at 42% and 40% in those regards. Ironically, the White Sox are second in either category despite their own slow start. Chicago is 9-9 at the moment but just one game back of the American League Central lead — the Royals are atop the division at 9-7.

Given they’re +1200 to win their league, betting on the Red Sox could be a great value play considering the current struggles of numerous other ballclubs within the league. But then again, it is indeed a long season, so you never know if the Yankees will catch fire while Boston may undergo a slump.

Another great value bet could be the Angles at +1500. Los Angeles employs a number of highly talented players such as superstar Mike Trout as well as multifaceted right-hander and designated hitter Shohei Ohtani, who already has four home runs and a 1.04 ERA this season. The Angles are currently 9-6 but are in an American League West Division that’s off to a hot start — the Mariners and Athletics are both 11-7.

Finally, it doesn’t seem like many bettors truly believe in the Indians, who are responsible for 1% of the bets and less than 1% of the handle. You can’t really blame the lack of confidence in the bettors either — if the Indians (currently 8-8) reach the postseason, it’s unclear if they’ll carry the resources necessary to surpass teams such as the Yankees, Red Sox, White Sox, or Rays.

Place your bets on the winner of the American League and get a $50 risk-free bet at DraftKings Sportsbook here.