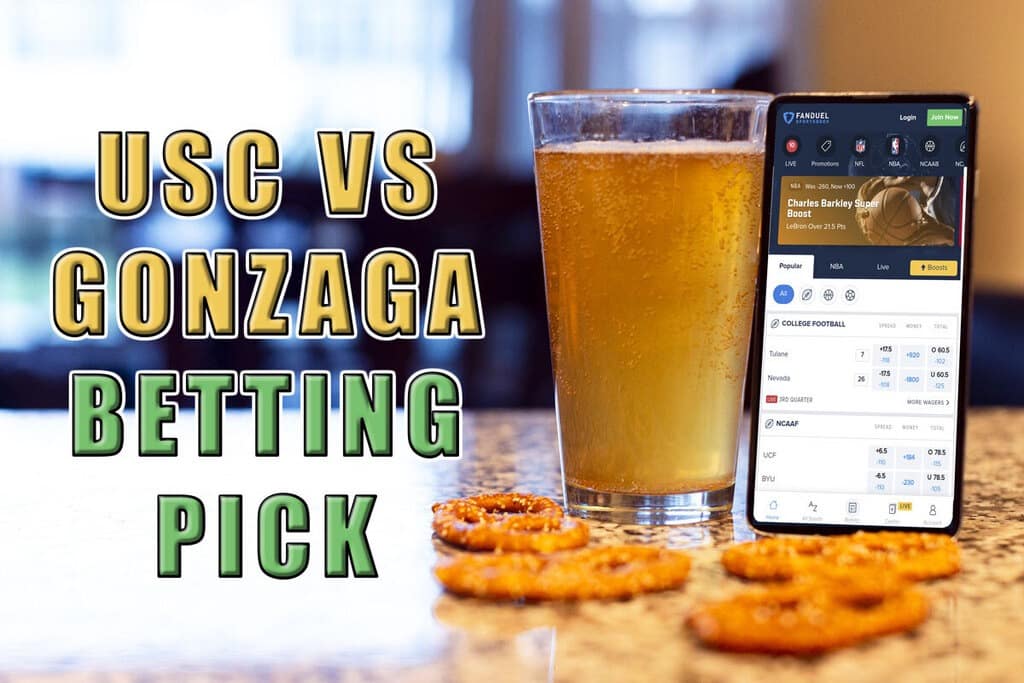 Monday night wasn’t easy for those pulling for the lower seeds in the Elite Eight. Oregon State’s magical run came to a halt against Houston, while Arkansas couldn’t get past Baylor. Both the Cougars and Bears are now headed to the Final Four, with the remaining pair of Elite Eight matchups are set to take place on Tuesday evening.

Let’s take a look at how Gonzaga matches up with USC and provide an Elite Eight betting pick and prediction.

Will top overall seed Gonzaga continue this trend of the higher seed advancing to one of the most prestigious stages of the tournament, or will chaos ensue as the final spots in the Final Four are cemented?

Register with DraftKings Sportsbook and grab 100-1 odds on any NCAA Tournament Elite 8 game by clicking here.

Every game is more important than the last. Every opponent is hotter than the previous. Gonzaga knows this is at must deal with a suddenly scary USC squad on Tuesday night when as it looks to advance to the Final Four for just the second time ever.

The Bulldogs haven’t lost a single game this season — they’re 29-0 entering this matchup with an average winning margin of 23.3 points per game. They’ve won by single digits just once this season in a five-point victory over West Virginia back in December.

The Bulldogs three NCAA Tournament wins have come with ease. After defeating No. 16 Norfolk State by 43 points, they then defeated No. 8 Oklahoma by 16 and then No. 5 Creighton by 18.

Prior to that, Gonzaga won the West Coast Tournament with 23 and 10-point wins over St. Mary’s and BYU, respectively.

Overall, Gonzaga is averaging 91.8 points per game, which is the best mark in the nation.

Needless to say, the Bulldogs have been a dominant team from start to finish this season. Most impressively, they aren’t showing any signs of slowing down during the NCAA Tournament en route to a potential national title. As the competition has stiffened, this is a team taking it up another gear.

However, they better not turn the lights off and tuck themselves in when it comes to this USC team, which has impressed many throughout the course of March Madness thus far.

The Trojans have also put together three consecutive double-digit victories during the NCAA Tournament, having defeated No. 11 Drake by 16, No. 3 Kansas by 34 (an extremely impressive win), and No. 17 Oregon by 14.

This single-digit spread courtesy of DraftKings Sportsbook could thus lead you to believe Gonzaga will cover. However, don’t be so quick to open your wallet for the Bulldogs.

What’s interesting about this matchup (and what’s typical every single year in regard to the transition from the Sweet 16 to the Elite 8 round) is that both teams enter having just one day of rest.

So does Gonzaga still have a good chance to cover?

Cash in on a $600 risk-free bet when you sign up with BetMGM by clicking here.

There’s a reason why Gonzaga has yet to come up short against any of its opponents this season — it’s a phenomenal basketball program with great talent on the roster and a superb head coach in Mark Few.

But USC’s success as a betting pick intrigues me while Gonzaga’s shakiness on that front doesn’t. Despite a perfect 29-0 straight up mark, Gonzaga is just 15-12-2 against the spread this year while USC is 6-3 in non-conference matchups.

The bottom line is this: USC is hot right now but Gonzaga is just way too talented. The former will make it close but the latter will still emerge victorious en route to a Final Four berth.

Take Gonzaga to win the matchup, but USC won’t lose by more than eight points and thus will cover the spread.

Sign up with FanDuel Sportsbook by clicking here and grab up to $1,000 in a risk-free bet.