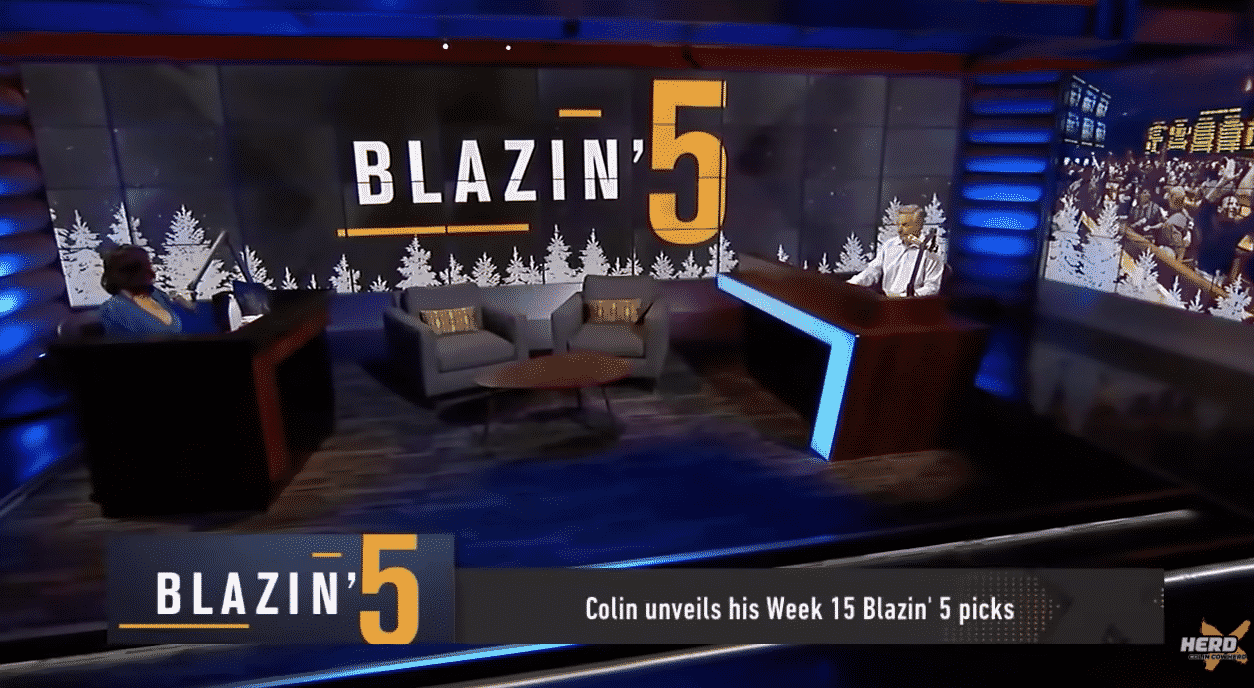 Colin Cowherd has released his “Blazing 5 Picks” ahead of a packed Week 15 slate of NFL games.

Colin Cowherd has made his picks and predictions for NFL Week 15 action. These are his against the spread picks.

Colin starts off his Blazin’ 5 picks with what he believes will be a letdown game from the Bills, who will be traveling cross-country to the Mile High city.

On the other side of the ball, QB Drew Lock has stabilized the Denver offense.

Among NFL teams, the Broncos are second-best against the spread, behind only the Miami Dolphins.

Colin believes this matchup is less about Tua Tagovailoa vs. Bill Belichick and more about Cam Newton vs. a stout Miami defense.

One could argue the Dolphins’ defense is the best in the league. They’ve allowed the second-fewest points per game in the NFL (18.8) and the third-lowest opponent passer rating (83.7). More importantly, Miami’s defense is opportunistic and especially effective when it matters the most. They’ve racked up an astounding 25 takeaways this season and have held the opposition to the lowest third-down conversion percentage in the league (33.1%).

Cowherd is resolute in the belief that Tua will be put in successful positions by his head coach Brian Flores, who spent ten years with the Patriots organization.

Colin notes that the line on this game has moved a bit since initially opening. This bet comes down to Seattle’s inability to cover the spread, having done so in just three of their past ten games. Cowherd believes this has occurred because the Seahawks are overvalued.

Colin believes the matchup between Seattle’s weak offensive line and Washington’s dominant defensive front will be a major difference in this one. In their past five games, Washington has four players with five sacks.

Washington has been simply dominant since Week 11. The Football Team is 4-0 over that stretch, has turned the ball over just three times (T-1st in the NFL). They’ve outscored the opposition by a +50 point margin and have won the turnover battle by five over that span.

Ultimately, Russell Wilson seems to find a way to win games on the East Coast, but it’ll be closer than the line suggests.

Get any NBA team at +75 odds on opening night at DraftKings Sportsbook right here.

Colin’s belief is that while Philadelphia was able to surprise the New Orleans Saints a week ago with rookie QB Jalen Hurts under center, Arizona won’t be caught off-guard. The Cardinals’ defense happens to have an even better version of Hurts to practice against every day: Kyler Murray.

Murray could be the ultimate difference maker in this one, both in the air and on the ground. The Eagles have allowed 364 rushing yards to opposing quarterbacks this season, the most allowed by any team in the NFL. Meanwhile, the Eagle’s defense has a paltry four interceptions on the year.

Colin’s final pick of the week isn’t one he likes, rather he loves. It’s his Pick of the Week.

Cowherd notes that the Chiefs’ redzone defense has been awful this season, allowing a league-worst 75% touchdown percentage when opponents get to the 20 yard line. On the flip side, New Orleans is one of just two teams to allow fewer than 300 yards of offense per game.

While KC was likely planning on building a defensive scheme to limit Taysom Hill, it was announced that future Hall of Fame QB Drew Brees will get the start for the Saints.