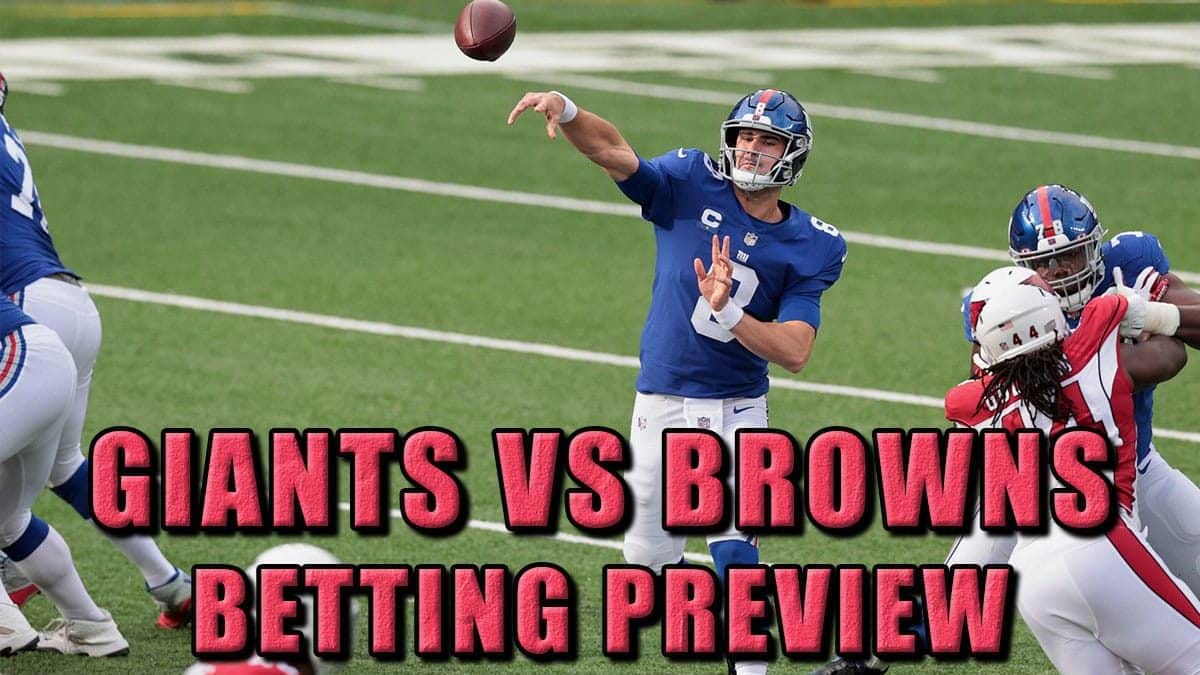 The Giants are now in second place in the NFC East after a recent loss to the Cardinals and a subsequent Washington win over the 49ers. They’re a game back of the division lead while the Football Team sit on top at 6-7.

Despite the Week 14 defeat, will the Giants be able to enter Sunday night with the motivation to notch a huge victory? Let’s dive into our Giants vs. Browns odds, picks, and prediction.

The Giants have won four out of five games but are likely going to be without starting quarterback Daniel Jones this weekend. Jones suffered an ankle sprain against the Cardinals and has also been dealing with a hamstring strain. Colt McCoy may indeed start for the second time in three weeks.

Not to mention, offensive coordinator Jason Garrett will not be calling the plays on Sunday due to a positive COVID-19 test. Therefore, tight ends coach Freddie Kitchens will take over those duties against his former team.

James Bradberry will also miss the game due to his placement on the Reserve/COVID-19 list. The star corner apparently came in contact with someone outside of the Giants’ team facility who had tested positive.

Taking all this into account, it’s safe to say the Browns should win this game by at least one touchdown, which is why I’m taking them with the spread.

The Browns employ a much more talented roster than the Giants. Their quarterback is better (regardless of if Jones or McCoy plays for Big Blue), their running backs are better, their receivers are better, and their starting tight end is better.

While Cleveland’s defensive unit isn’t as strong as the Giants, it won’t have that tough of a task on its hands containing a New York offense that’s second-to-last in both total yards per game and scoring.

That, plus the Jones, Garrett, and Bradberry situations, should lead to the Browns winning by more than 6.5 points. All the Browns offense will likely need to do is score around 21 points to do so, and if you watched their recent Monday Night Football loss to Baltimore, you know the unit is very much capable of completing that task.

The New York defense will do what it can throughout much of the matchup, but with McCoy likely under center, the Giants may have a tough time on either side of the ball. This will force them to punt deep in their own territory a number of times, which will lead to easy drives for the Browns on a number of occasions (this was the case in the Giants-Cardinals matchup last Sunday).

If the Giants lose, their postseason hopes will be that much closer to dying, but I just can’t see the offense doing enough to keep the point differential within 6.5. The offense did just enough against Seattle, sure, but Cleveland’s defense isn’t as poor of a group.

Bet the Browns -6.5 and grab $1000 in free bets at DraftKings Sportsbook HERE.

Giants-Browns Total Pick: Hammer the Under at all Costs

This matchup features a strong Giants defense (which could still be relatively strong even without Bradberry) along with a weak Big Blue offense that can’t consistently put points up on the board. And to worsen the situation for New York, Colt McCoy may be taking the snaps instead of Daniel Jones.

For the over to hit, I believe one team is going to need to score around 30 points, and I can’t see this Giants offense even coming close to that or the defense allowing it, especially with the way each unit has performed as of late.

Each of the Giants’ last nine games against AFC North teams has also hit the under.

Giants vs. Browns Prediction: Take the Browns to Win Outright

Sorry, Giants fans. This Browns team is simply more talented right now and in a better situation, given their starting quarterback is healthy and their normal play-caller will be present at the game.

Again, this Giants defense has been strong all year, but there’s only so much it can do in order to take the pressure off a weak Big Blue offense, especially without Bradberry. It all came to fruition against Seattle, but as was previously mentioned, the Seahawks defense is certainly worse than the Browns’ unit.

Cleveland’s offense won’t need to do too much in order to win this game, and it’ll certainly put up the necessary points in order to notch its 10th victory of 2020.

The Giants are in a tough spot given the current situations involving Jason Garrett and Daniel Jones and will experience a truly difficult time conjuring up significant production on the offensive side of the ball. The defense will remain strong for the most part, but there’s only so much that unit will be able to do, especially since Bradberry is inactive.