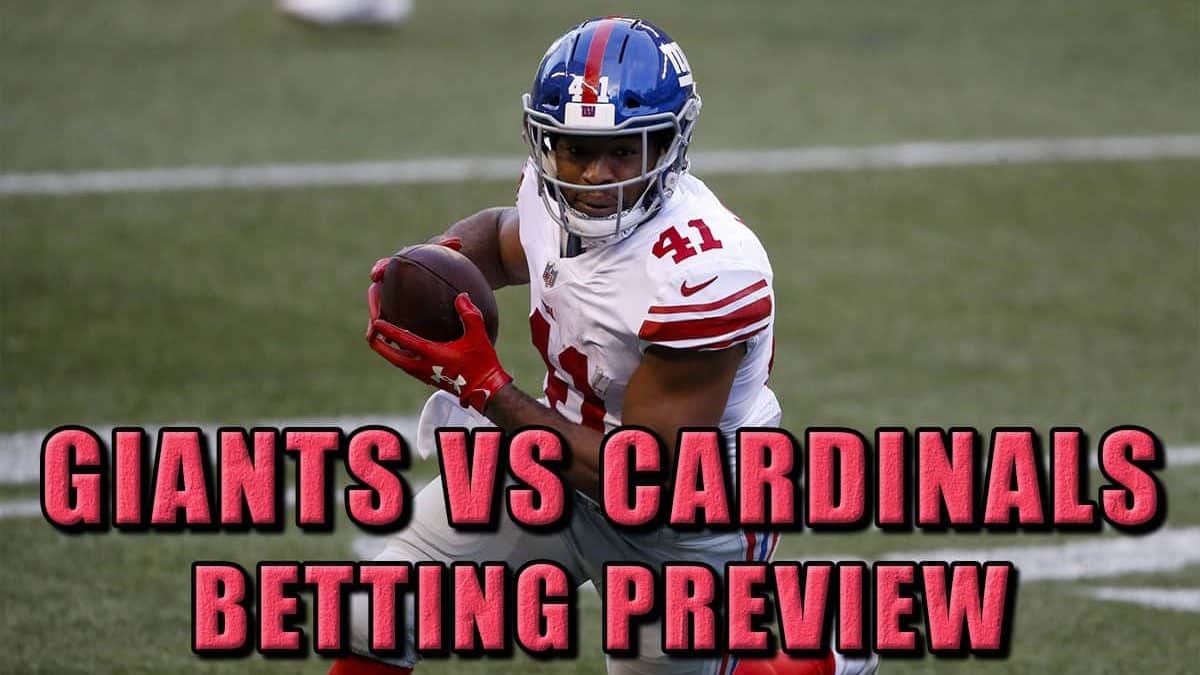 The first-place Giants are red hot, having won each of their last four games including a recent victory over the Seahawks last Sunday. The Cardinals, on the other hand, have lost their last three games and are 6-6, sitting in third place in the NFC West. Will the Giants be able to oust this struggling ballclub and remain atop the NFC East? Let’s dive into our Giants vs. Cardinals odds, picks, and prediction.

Get 50-1 odds on the Giants, Eagles, or Steelers to score 1 point at FOX Bet in NJ here or in PA here. Read more about it here.

The Giants are indeed hot and haven’t lost since the beginning of November, but the oddsmakers still won’t give them the respect they deserve. This line was originally at Giants +2.5, changed to +1.5, and is now +3.0.

Regardless, I wouldn’t worry so much about the alteration in the spread. The Giants will continue their success despite the fact that they’re entering as underdogs.

Putting the Giants as 3.0-point home underdogs is disrespectful at this point. This team showed last week that its recent success wasn’t just due to easy opponents and that the defense is the real deal.

Big Blue carries the momentum heading into Week 14 while the Cardinals’ story is essentially the opposite. Arizona has lost three straight games, with its last win coming nearly a month ago against the Bills.

The Giants defense is playing at such a high level that it’s tough to imagine the unit will crumble this week even though the Cardinals have sported a high-powered offense for much of the season.

If New York’s defense just steps up (which it should), the offense won’t need to accomplish too much in order to emerge victorious regardless of if Daniel Jones or Colt McCoy is playing.

Momentum is huge in the NFL, and the Giants certainly possess that ahead of this matchup. That’s why you should ultimately place your money on the +3.0 spread.

The underdog has covered in each of the Giants’ last nine games. Per FanDuel Sportsbook, 48% of the spread bets and 53% of the handle are going towards Big Blue.

Bet the Giants +3.0 and grab $1000 in free bets at DraftKings Sportsbook HERE.

Giants-Cardinals Total Pick: Take the Under

Either defense is pretty strong on the scoring front — both are in the top half of the league in that category.

The Giants defensive unit is coming off arguably its best game of the season, having allowed Russell Wilson and the Seahawks to score just 12 points.

That along with the fact that the Giants offense is very much below-average when it comes to scoring (30th in the NFL with 19.3 points per game) should lead you to believe that the under has a good chance to hit in this game.

For the over to hit, one team will likely need to score around 25 points, and I just don’t see the Giants offense reaching that mark or the defense allowing it.

The Cardinals have actually hit the under in each of their last four road games dating back to October.

The public seemingly agrees with me — 59% of the bets and 65% of the handle favor the under, per FanDuel Sportsbook.

Giants vs. Cardinals Prediction: Take the Giants to Win Outright

While I believe the Giants will cover the 3.0-point spread, I also believe they’ll win outright.

This will be a defensive battle, and to be completely honest, the Giants employ the better unit as of this very moment. Patrick Graham’s group will step up and take the pressure off an offense that’s struggled for much of the year. In turn, the Giants offense won’t need to do too much en route to a victory, just as was the case in last week’s win.

Not to mention, the Cardinals have actually lost seven of their last 10 games when favored.

The public agrees with me. According to FanDuel Sportsbook, 63% of the bets and 74% of the handle are going towards the Giants moneyline (+123).

The Giants are red hot and will enter this game with the motivation needed to remain atop the NFC East. Take them with the spread (+3.0) and on the moneyline (+123), and also hammer the under (45.5).

Click HERE to get a $250 first deposit match with PointsBet.