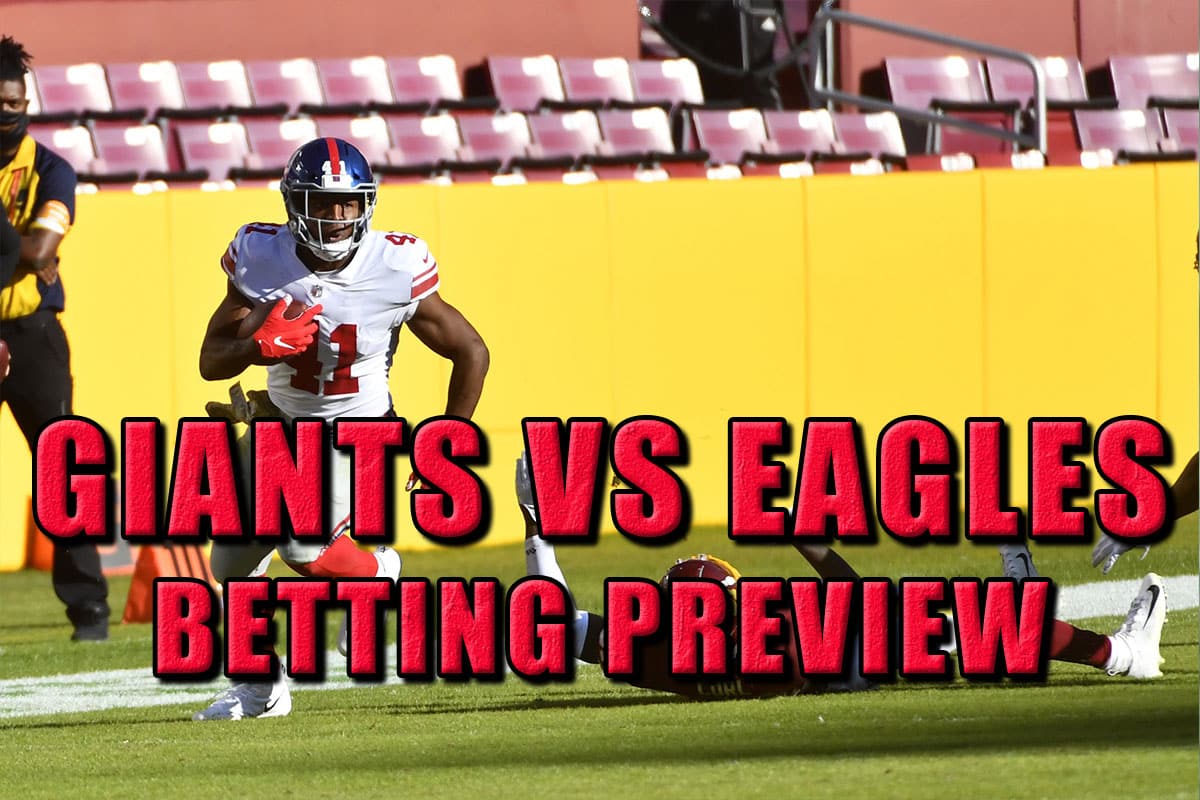 The Giants are coming off a big win over the division-rival Washington Football Team and are now just one win behind the NFC East-leading Eagles. Thus, a victory over the Eagles this Sunday afternoon would be crucial for the Giants. Will they do it? Let’s get into our Eagles vs. Giants odds, pick, and prediction.

Sure, the Giants are 2-7 and sit at the bottom of the NFC East, but they’ve been in almost every game they’ve played thus far.

That’s why I believe the Giants will ultimately win this coming Sunday. This is a huge home game and they certainly carry momentum from last week’s victory, not to mention the defense is looking strong and the offensive line is improving.

The Giants are due for a win over the Eagles as well. They haven’t defeated Philly since the 2016 campaign, having lost the last eight meetings.

Get 50-1 odds on either the Giants or Eagles to score a point with FOXBet here. Read more about the offer right here.

If I believe the Giants are going to win, that means I also believe they’ll cover the 3.0-point spread (obviously, considering they’re underdogs).

The Eagles aren’t that much more talented than the Giants and are prone to bad performances — they’ve lost to Washington, the Rams by double digits, and tied the last-place Bengals.

As was mentioned before, the Giants have competed in almost every single game, with the Week 3 loss to the 49ers (36-9) the only defeat that’s been completely lopsided.

Thus, expect the Giants to continue that competitive nature this Sunday afternoon at home and enter the game with a chip on their shoulder, especially considering what happened in their last game against the Eagles.

In the midst of that Thursday night matchup, Big Blue saw an 11-point fourth-quarter lead vanish into thin air, ultimately losing 22-21. They’ll be fired up to put that game completely in the rearview this weekend.

Thus far on the year, the Giants are 6-3 against the spread while the Eagles are 3-5, per DraftKings Sportsbook.

Get 25-1 odds on the Eagles or Giants to win this Sunday with FanDuel Sportsbook right here.

Eagles-Giants Total Pick: Hammer the Under

The total currently sits at over-under 44.5, and you need to hammer the under at all costs.

These two quarterbacks — Daniel Jones and Carson Wentz — are prone to making mistakes and turning the ball over, and neither run that efficient of an offense. The Giants are 31st in the NFL with 18.7 points per game and the Eagles are tied for 23rd with 23.3 average points.

For the over to hit, one team may need to score around 26 or 27 points, and I just don’t see that occurring. Given the weak state of either offensive unit, this seems like a 21-17 game at best.

As I mentioned before, the Giants carry momentum from their Week 9 win, they’ll likely possess a chip on their shoulder, the offensive line is improving, they’re due to beat the Eagles for the first time in years, and they’re at home. Albeit with no fans, they still possess an advantage over a traveling Philly team.

Taking all that into consideration, I believe the Giants will absolutely win on Sunday.

Big Blue is much better than their record suggests. They’re improving each and every week and could possibly be 5-4 if a few plays in past weeks went their way.

Bet the Giants +150 on the moneyline and get a risk-free day of betting this Sunday with DraftKings Sportsbook here.

The Giants will enter this game motivated to notch their first victory over the Eagles since 2016. Take the Giants +3.0 and on the moneyline, as well as hammer the under. Final score: 21-17 Giants.

Get 50-1 odds on either the Giants or Eagles to score a point with FOXBet here.