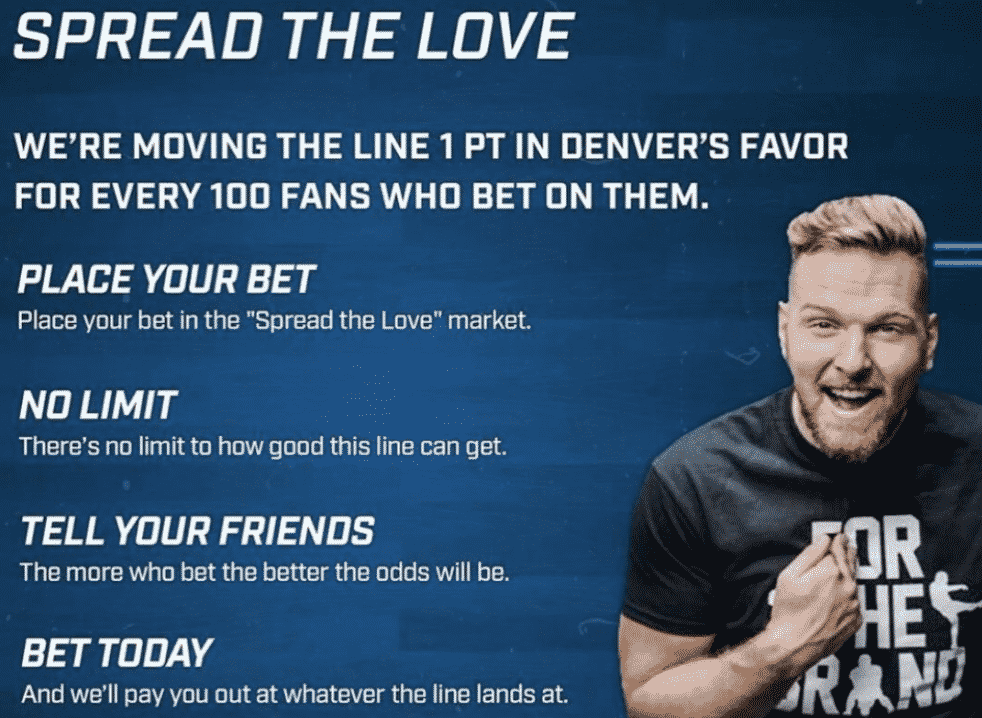 Pat McAfee signed a massive deal with FanDuel Sportsbook as the premier sponsor of The Pat McAfee Show. As part of the deal, McAfee rolls out a series of promos and boosts with FanDuel.

Here’s how to get the latest McAfee bet boosts with FanDuel Sportsbook.

Ahead of Sunday Week 1 NFL action, FanDuel Sportsbook has a variety of aggressive new user sign up offers, but the headliner is the Spread the Love promo on the Sunday Night Football matchup between the Cowboys and Rams.

Spread the Love is a popular FanDuel Sportsbook promo often promoted by McAfee. This special calls on FanDuel bettors to rally on one side of a designated game, in this case the Rams, to push the point spread to unbeatable levels.

For every 5,000 bettors who back the Rams on Sunday, FanDuel will move the spread by one point. Given the high-profile nature of these two teams, along with the primetime platform, it’s likely that massive amounts of bets will flow in. In turn, the Rams should become a substantial underdog, presenting FanDuel users with big time value.

In the Illinois sports betting market, McAfee is touting special Chicago Bears odds for their NFL Week 1 opener against the Detroit Lions. They game is essentially a pick’em, but FanDuel is offering Illinois bettors +12.5 points with this McAfee promo. If you’re in Illinois, you can sign up here.

The headline offer at FanDuel Sportsbook for NFL Week 1 is the Spread the Love promo on the Rams. Currently, L.A. is a three-point underdog, but with this special, it’s likely to get 20-40 points in total spread value.

Meanwhile, Illinois bettors can also get special odds on the Bears.

Pat is begging and pleading with bettors to come along for the ride on FanDuel Sportsbook (FanDuel Par-A-Dice Sportsbook) in Illinois. Let him tell you about it:

We go live to @PatMcAfeeShow with a HUGE odds boost for Illinois sports bettors 💰https://t.co/sXMmwtJf0I pic.twitter.com/nRL5KhO6ac

If you are a new user, you can sign up and claim an addition $1,000 risk-free first bet.

While the above promos are for Illinois bettors, bettors in all states can grab the $1,000 bet offer by clicking here.

We're expanding our partnership with @PatMcAfeeShow into a first-of-its-kind official partnership between a legal Sportsbook and sports media personality.

In July, 2020, FanDuel extended an agreement it had originally made with McAfee in 2019. It made FanDuel the exclusive sports betting and daily fantasy partner of McAfee’s show.

It is the first of its kind partnership between a legal sports betting site and an individual media personality.

The partnership will see FanDuel mixed in heavily with Pat McAfee’s content, including with branding on-screen.

In addition, McAfee serves up promo offers called “spread the love,” which compel users to bet on a specific game to move the line in a team’s direction. The more people who bet, the higher the line goes. Players can place their bet at any time and still claim the closing odds.

In one case, they got so high that FanDuel decided to just award winners before the game started, presumably so players could then wager the winnings.

While many sportsbooks are heavily promotional – William Hill offers a promo code, and so does PointsBet – FanDuel has elected to be more tied in with media personalities.

They routinely used Barstool Sports personalities to hawk their product prior to Barstool getting partially acquired by Penn National Gaming to release the upcoming Barstool Sportsbook.

FanDuel clearly sees its growth is through similar media partnerships. Pat mcafee might just be the first.