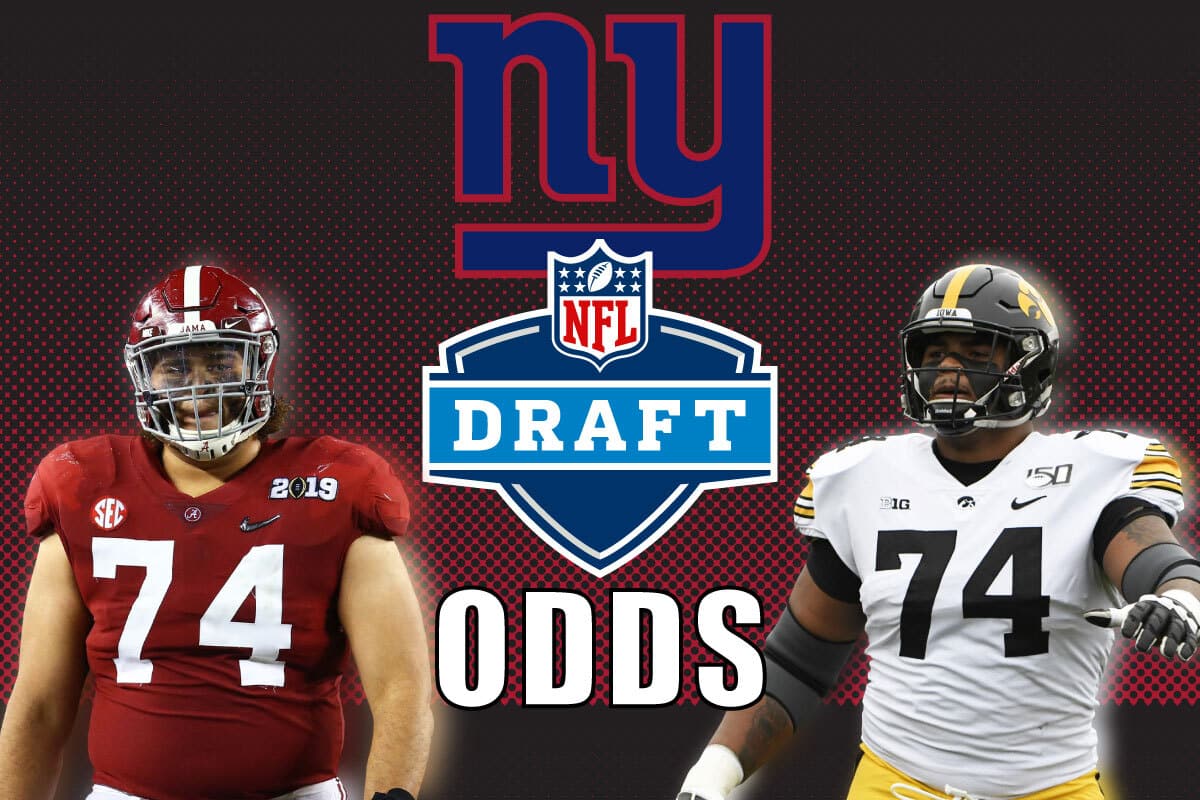 The 2020 Giants NFL Draft odds strongly point toward the team bolstering its offensive line in front of quarterback David Jones with the No. 4 pick. Will general manager Dave Gettleman select standout Alabama tackle Jedrick Wills or will he go a different direction? While those located in New York won’t be able to bet on this year’s NFL Draft, New Jersey is offering bettors the ability to wager online at top shops like DraftKings Sportsbook.

With the sports world at a standstill in recent weeks, betting action figures to be flowing on the draft at many legal online sportsbooks, so let’s take a look at the Giants NFL Draft odds to cash in on the team’s first pick this Thursday night.

DraftKings Sportsbook is providing bettors with several Giants betting markets along with tons of wagering options on the NFL Draft. Here’s how DraftKings’ oddsmakers size up the Giants’ first selection.

Bettors can also wager on outcomes such as player draft position, position of each team’s first round pick, position of Mr. Irrelevant, first players drafted by position, along with plenty of other props.

The Giants wouldn’t start Jedrick Wills on the left side of the line, considering the fact that giving a rookie the blindside duties right away is a truly significant risk. But he’d be more prepared for that responsibility than other right tackles in this draft since he blocked for lefty quarterback Tua Tagovailoa at Alabama. Wills has great size at 6-4, 312 pounds, and like Tristan Wirfs, he would be a significant piece to the current puzzle that is the Giants offense.

If the Giants were to draft for need in the first round, they’d go with an offensive tackle to protect quarterback Daniel Jones. Thus, enter Tristan Wirfs, the 2019 Big Ten Offensive Lineman of the Year and a 6-5, 320-pound stud who could immediately start on the right side of the line before eventually transitioning to Jones’ blindside. The Giants need to stop overlooking their offensive tackle issues, especially with a developing quarterback. Selecting Wirfs would go a long way in accomplishing that.

General manager Dave Gettleman prefers to draft the best player available. If Joe Burrow, Chase Young, and Jeffrey Okudah respectively go No. 1, 2, and 3, then Isaiah Simmons will be the top player at No. 4. With his versatility and athleticism, Simmons would be the playmaker desperately needed by this Big Blue defense, a group that finished 25th in total defense and 28th in passing defense last year. In 2019, Simmons recorded 104 total tackles with 16.5 tackles for loss, eight sacks, three picks, and eight passes defended en route to winning the ACC Defensive Player of the Year Award.

If the Chargers (No. 6 overall) or Dolphins (No. 5) swap with the Lions (No. 3) in order to draft a quarterback, then Ohio State’s Jeffrey Okudah could drop to the Giants. It would be a risky pick, considering the Giants are already significantly young at corner and just drafted Deandre Baker in 2019. Nonetheless, Okudah is a surefire talent who would immediately improve New York’s defensive backfield, a unit that struggled mightily last year. Having been a unanimous All-American selection in 2019, Okudah would likely start alongside free-agent acquisition James Bradberry.

If no pick-swaps are made, the Giants will be in position to take any wideout in the draft, but it’s still a long shot that they would even consider Alabama’s Jerry Jeudy. Nevertheless, it’s not a scenario that’s absolutely impossible since their goal should be to build around Daniel Jones. They’re going to want to snag any sort of weapon to help the young quarterback develop, and Jeudy would tremendously help Jones and the rest of the Jason Garrett-led offense.

A lot would need to happen for Chase Young to fall to the Giants. In my opinion, the Chargers would need to swap picks with the Lions (No. 3) and then the Dolphins would need to swap picks with Washington (No. 2), which would likely lead to three quarterbacks taken in the top three picks. But at No. 4, Young would undoubtedly be an exciting acquisition that Giants fans were actually hoping for before New York won two of its final three games. Young was a sensation for the Buckeyes and would be a star within a Giants pass rush that surely needs one after totaling 30 and 36 sacks in 2018 and 2019, respectively.

As was mentioned before, Dave Gettleman prefers to take the best player available, and that may be Isaiah Simmons. Even if they trade back to No. 5 or 6, they’d still likely be in position to take him. From this perspective, it wouldn’t be the correct pick in regards to the holes that are present throughout the roster, but it’d be a selection that would help improve this defense and surely excite many Big Blue fans.