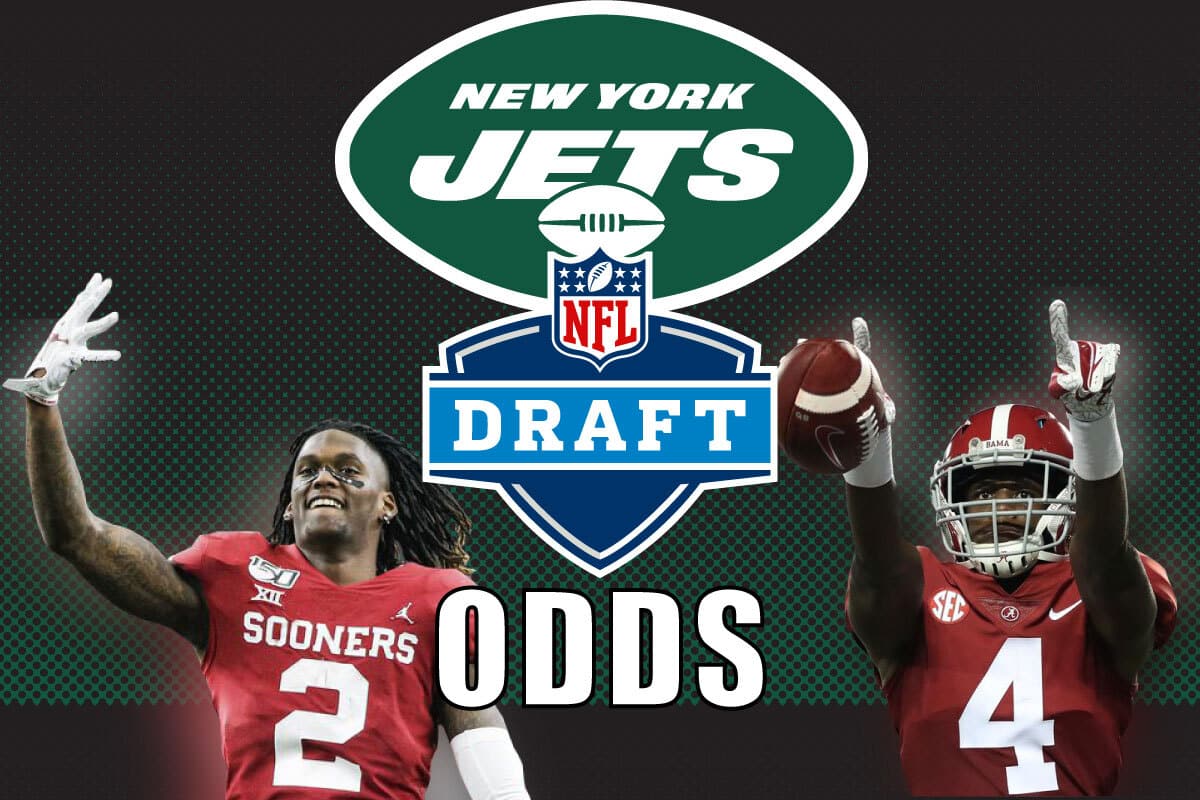 It only takes a brief look at the 2020 Jets NFL Draft odds to conclude the team is likely to add to its offense with its first pick on Thursday night. It’s less clear, however, which position Jets general manager Joe Douglas will address. He could provide Sam Darnold with an electrifying playmaker, or he could elect to protect him by fortifying a suspect offensive line. If you think you have a hunch about what Douglas will do, there’s good news. Bettors located in New Jersey can wager on the Jets’ first pick along with tons of other props at DraftKings Sportsbook.

Of course, those in New York won’t be able to bet on this year’s NFL Draft.

Eyes of sports bettors will be closely glued to television screens come Thursday night, so let’s run through the Jets NFL Draft odds and to zero in on what they will do with the No. 11 pick.

DraftKings Sportsbook has this year’s NFL Draft completely covered with a robust menu of betting options. Among them is a detailed offering on the Jets’ first pick. To the surprise of nobody, oddsmakers strongly favor the Jets adding to the offense with pick No. 11, but there are also plenty of long shot defenders in the mix.

FOX Bet is also bringing it to NFL Draft bettors with a loaded betting menu of wagering options. Along with a plentiful offering of custom bets, FOX Bet is also offering a detailed market on the Jets’ first selection.

FOX Bet is also offering odds on which position the Jets will address first.

The New York Jets need a tackle desperately, and Mekhi Becton is one of the best in this draft class. For a long time, it didn’t seem like he’d be available at 11, but a renewed love for high floor players combined with a failed drug test seems to have Becton falling down draft boards.

That’s only to the Jets’ advantage. They get to take one of the most physically dominant players the NFL has ever seen. He has technique issues to work out, but Becton’s ceiling is sky-high.

Joe Douglas has targeted boom-or-bust players all offseason. Why would the draft be any different?

Wirfs is another offensive lineman who has taken a tumble down draft boards as Thursday approaches. Wirfs had a phenomenal combine that led many media talent evaluators to believe he was the top tackle in the class. The NFL personnel execs don’t seem as sure, with many scouts believing he may be a guard at the next level.

It’s possible that Wirfs could tumble down draft boards. When the Jets pick at 11, they may decide to take Wirfs anyway. The team needs help all along the offensive line and Wirfs would be a strong piece to plug on the interior.

Douglas has wanted to fix the offensive line so much that he’s basically ignored almost every other hole the team has. Why wouldn’t he ignore larger needs by continuing to add to the line?

If the Jets don’t like the offensive linemen left on the board at No. 11, Lamb will almost certainly be the pick. Multiple reports say the Lamb is the Jets’ top receiver target.

Douglas has said he wants to get explosive weapons for Darnold. Well, now’s his chance to prove it.

The focus of the 2020 draft has been on the offensive side of the ball, but cornerback is also a big need. The Jets starting corners right now are Pierre Desir and Bless Austin or Arthur Maulet. That’s not going to cut it in the modern pass-first NFL.

If the Jets aren’t enamored with the talent left on the board at pick 11, then it’s possible they decide to go defense and fix their main weakness. With C.J. Henderson on board, the Jets could have a strong secondary for the first time since Darrelle Revis patrolled the backend.

Joe Douglas is a man who values positional value, and cornerback is one of the most valuable positions in the league. don’t be shocked if he makes a move to address the huge weakness in the Jets secondary.

Edge rusher has been an issue for the Jets for a decade. The last time the team had an OLB reach double-digit sacks was Calvin Pace. That’s the longest streak in the NFL, and it needs to come to an end.

K’Lavon Chaisson is a high-risk, high-reward way to address the issue. Chaisson has all the physical tools to be a dominant edge rusher in the NFL, and the scouts love his technique. Something is off though as Chiasson never had more than 6.5 sacks in college. Only three of those came in the regular season of that year.

Would Douglas take a risk on a player with elite traits and spotty production?

He does love edge rushers. He also believes the game is won and lost at the line of scrimmage. It wouldn’t be that shocking if he decided to follow through with that point of view if he decided not to take an offensive lineman.

If the Jets select Josh Jones over players like Andrew Thomas or CeeDee Lamb people shouldn’t be shocked. Jones is the exact type of player Douglas has targeted all offseason.

He’s big, athletic, has experience in a zone-blocking scheme, and he fits Adam Gase’s preferred archetype. Most importantly, he’s a strong pass blocker–though he struggles as a run blocker. Given that he seems to be the perfect fit for Douglas and Gase’s vision, fans should keep in mind that he is a real possibility.

The Jets will select Mekhi Becton at 11th overall. His ceiling will be too much for Douglas to pass on. Getting Mt. Becton will be a great way for Douglas to cap off his offseason long revamp of the Jets offensive line.